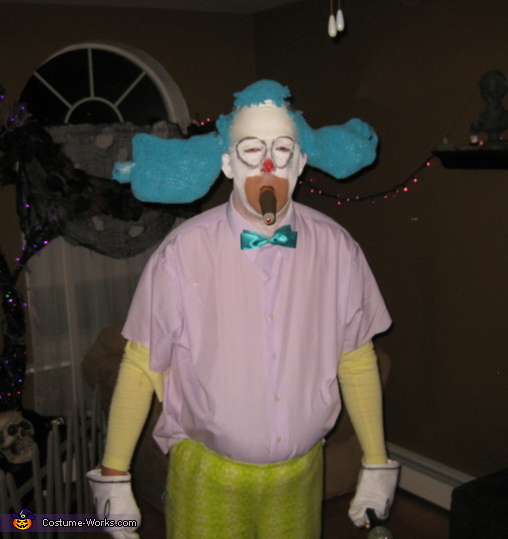 A word from Mike, the 'Krusty the Clown' costume creator:

Hey HEY! I decided to don the motif one of my all-time favorite cartoon characters, Krusty the Clown from The Simpsons.

To go for the look I wanted, I started with the head. For the opaque bald head, I went with a swim cap from Sports Authority. I then attached two duct-taped pieces of foam wire from a dollar store to each side of the cap. Cotton balls were collected and used for the hair volume, sealed in two cut halves of a long turquoise scarf from Walgreen's. Since I had difficulty finding the right bow tie, I took an AC Moore hair scrunchy and cut the backing, duct taping it to the top of my shirt collar.

I also bought a shirt from Kohl's for the top, and cut the sleeves. I topped off the attire with plastic clown shoes and funky lime green pajama bottoms from Salvation Army.

To simulate that 'Simpson' look, I drew black circles around my eyes, and pulled sleeves from a dollar store piece of clothing up over my forearms to simulate the character's complexion. Cartoon gloves, with hand-drawn circles from a makeup crayon I used were also featured.

Being the showman the second hardest working man in show business is, I picked up a foam pop singer microphone from a discount store.