Rick and Morty
by Oliver

The Rickest Rick
by James 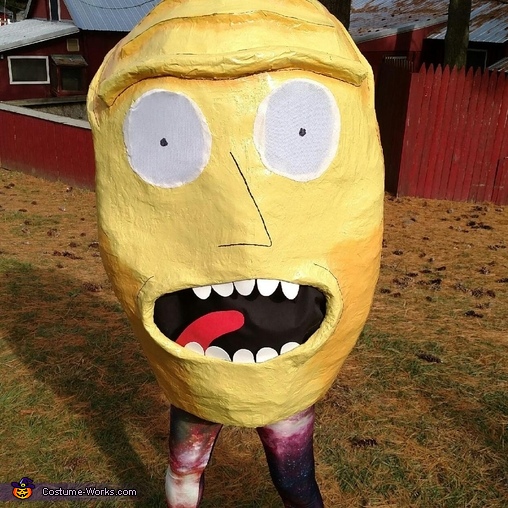 A word from Greg, the 'Kromulon Head from Rick & Morty' costume creator:

Build Process: I used chicken wire to shape the initial costume and then used 8 layers of paper mache and then bondo to reinforce some of the weaker areas. The costume was then sanded down, coated with Elmer's Glue, and then spray painted two different shades to give depth and shadows. After that, I traced certain areas with sharpee to give the drawn effect that it has on the cartoon show. For the mouth, I used cut shapes from foam sheets (Wal-Mart & Michael's sell them) for the teeth and tongue, and then glued black fabric hanging down to give the mouth the same appearance and depth in the show. For the eyes, I used a spaced out/see-through white fabric from Jo-Ann's Fabric. I doubled it over and then used Whacky Tacky to bond it together. I then took a paper plate, traced it, and cut the circles. I then drew the black eye dot with Sharpee and glued on the eyes. Whole build process took roughly about 80 hours and completed in a week.