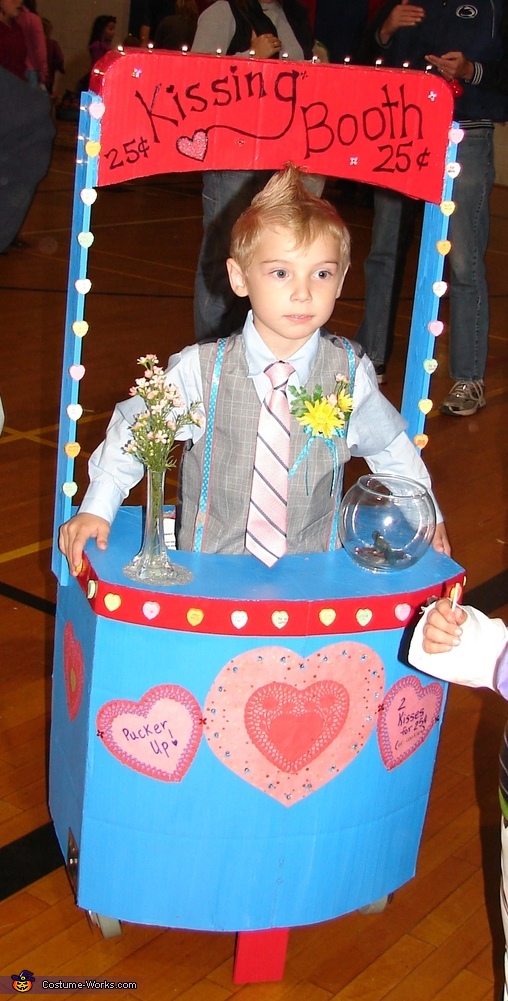 This homemade costume for boys entered our 2012 Halloween Costume Contest, in the Best Children's Costume nomination!

A word from Nicole, the 'Kissing Booth' costume creator:

Eli has always been affectionate....so it was a no brainer to make him into a Kissing Booth for Halloween. Penny for your thoughts....or two kisses for a quarter if you are wearing this adorable costume! This suave entrepreneur will find his way into your heart and your wallet with this home-made costume!!

Dressed in his Sunday Best, a floral corsage, and a smile you can't resist. Eli is ready for his dream job!!
The kissing Booth is constructed out of cardboard and hot glue. It was decorated with candy hearts, shiny hearts, and paper hearts. There are cordless lights in the sign and on the front. A vase and flowers, as well as a bowl for Eli to collect all his Kiss Cash are glued to the stand. Wheels were installed on the bottom for easy movement!! Constructed out of things that I already had, so no added cost!

Another easy costume!! That will melt everyone's hearts!!