Max Where the Wild Things Are
by Melisa

King of All Wild Things Costume 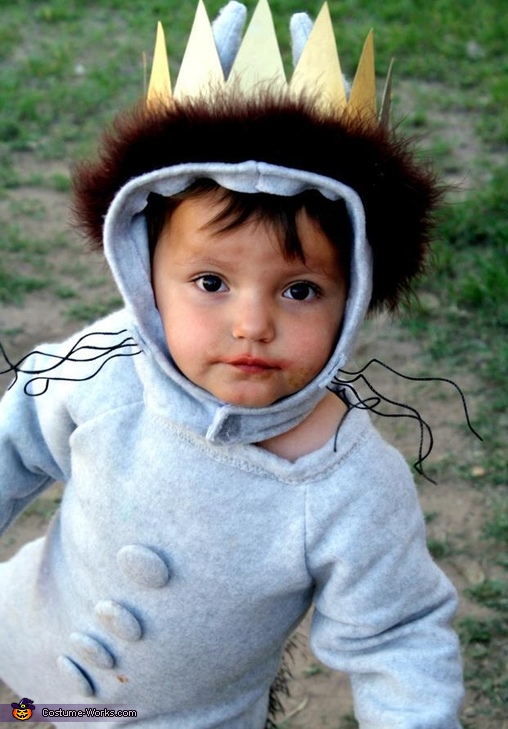 King of All Wild Things

A word from Tracy, the 'King of All Wild Things' costume creator:

Anybody who knows my little "Wild Thing" knows exactly why we chose this costume! He's definitely a wild thing, and he definitely thinks he's king! I used to LOVE "Where the Wild Things are" when I was growing up, and I couldn't resist. This is the very first costume I've ever made. Although I can't give detailed instructions because a lot of late nights and coffee were involved, I'd probably skip a few things I did here and there, I can give you a few of my favorite parts of the costume.

I used scrap cardboard we had lying around for the crown and measured and cut out the crown to fit him. I spray painted it gold and bought some "feather furr" from a craft store and hot glued it on.

For his whiskers (probably my MOST favorite aspect of this costume), I used pipe cleaners. When I first purchased them they were a last ditch effort because I couldn't think of anything else. I played around with a few different ways to do this, and I ended up burning all the "furryness" off of the pipecleaners to get this "whiskery" look. Then I twirled them around my finger and pulled taut to make them look like whiskers.

For the feet, I just cut out a shape that looked like a ducks foot with claws (lol) out of the scrap material I had left over and hot glued the material on to an old pair of white tennis shoes. The feet came out great! Even though it was total and complete guesswork!