The Legend of Zelda Link Costume 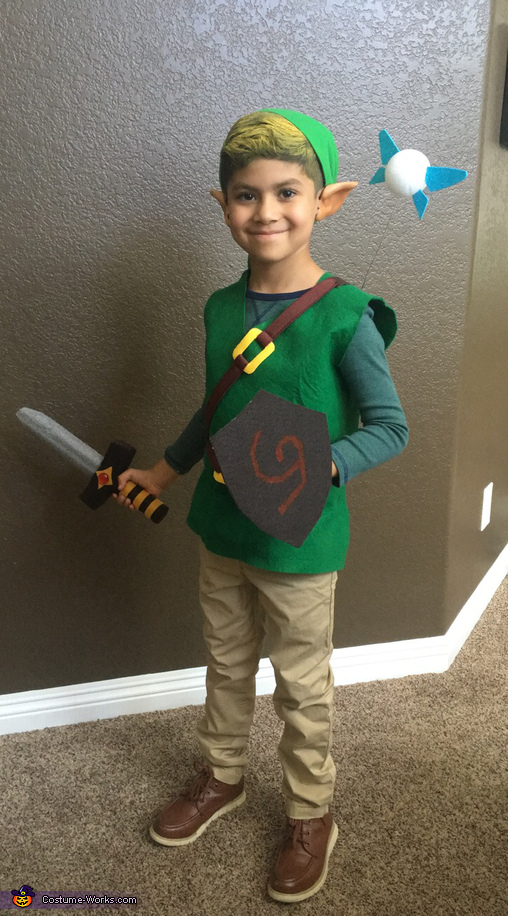 A word from Judy, the 'Link from Legend of Zelda' costume creator:

My son Gabriel is a huge Legend of Zelda fan!! He eats, breathes and dreams everything Legend of Zelda. He enjoys reading the books, playing the Series video games and pretending to be Link every chance he gets. He came up with the idea to be Kid LINK this Halloween and he also wanted to create accessories for his costume.

My son did not want a store bought costume and guided me in making his creation. We used felt and Velcro to create the shirt and a hot glue gun to attach a belt. For the shield I used cardboard to outline the shape of the shield, brown felt for the outside material and I painted on the shield symbol with orange paint. For the sword, I used styrofoam for the shape, brown and gold felt for the outside material and glued on a red gem. We had the most fun creating LINK's fairy "Navi". We used styrofoam for the round shape and cut the wings out of paper and glued them on. I attached the Fairy to wire and glued it to the back of the costume so that the fairy appeared behind his shoulder.

We went to a fall festival this past weekend where my son wore his costume and we had a lot of people come up to him and compliment it. They were especially excited to ask about the fairy. He was so proud to wear it and was happy to see everyone liked it!! He didn't just wear the costume, he got into character and it made it more exciting to watch him. He can't wait to wear it to school!

I hope that my sons Link costume is selected as a winner because he truly gave me all the input for his costume. We went shopping for the materials together and he was a great helper in adding all of the touches. It would bring him great joy to see that other people love his costume as much as he does. He was very detailed in how the costume should look and inspired me to do a great job for him. I enjoyed making this for him and seeing him get into character.