Colonel Sanders and his Bucket of Chicken
by Michelle

Colonel Sanders and his Bucket of Chicken
by Jasmine 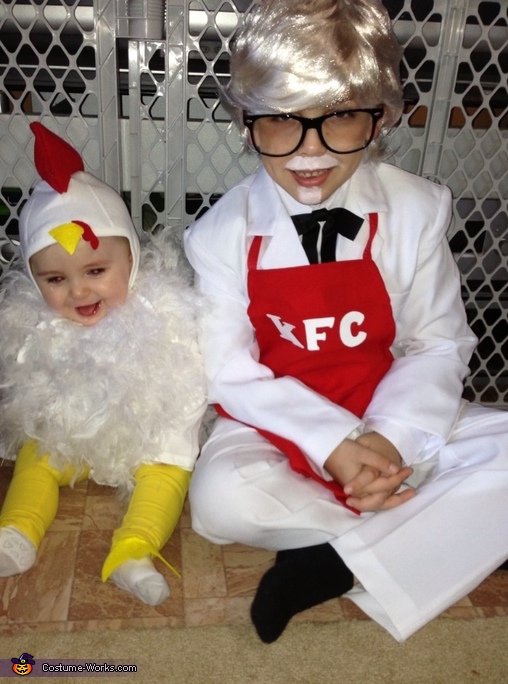 A word from Rudy, the 'KFC Colonel Sanders and Chicken' costume creator:

This is my son (colonel sanders) and daughter (chicken)! Both are completely NO SEW!! Yes! For Colonel Sanders I just used an old wig we had around the house, ribbon for his tie, and fake glasses from a dollar store. I found a red children's apron on amazon and hot glued on the letters I cut out of card stock. I also had the white suit. This costume cost practically nothing at all! For my daughter I ordered the hat off of Hannah Anderson website a while back, I hot glued on the red comb I cut out of felt and stuffed with a little stuffing, I also cut the nose from felt. For the body I took one onesie that was her size and another that was two sizes bigger with long sleeves. I stuffed between the two, you can stitch them together, but I didn't and it stayed fine. I hot glued two feather boss around the body (while she wasnt wearing it obviously). I put her in yellow leggings and put a pair of socks over her shoes with chicken feet cut from felt hot glued on.
He won his school costume contest and we got loads of compliments and extra candy while trick or treating! My favorite costume so far!