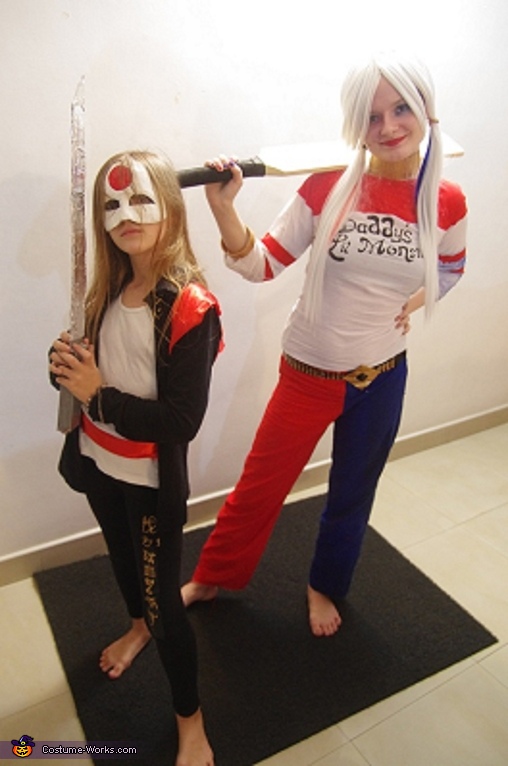 A word from Kat, the 'Katana and Harley Quinn' costume creator:

I was going to put on face/body paint with the costume, but I didn't have any. Before wearing the costume I experimented with ways to make the paint and figured out how to make it, but I forgot how I made it and couldn't figure it out again, so I went without it and just wore make up.

When I was working on the wig I needed to see the back of it. I wanted to put it on a wig head so I could see. The only problem with that was that I didn't have one and they don't sell them anywhere near where I live so I decided to make one. I did it by making a sort of 2 piece mould of my head by covering it in aluminum foil, sticking the mould together into one piece, covering it in a mixture of silicone and baking soda, stuffing it with plastic shopping bags, and putting it on a cardboard tube. There was one problem with that though. The baking soda was supposed to be corn starch and I got them mixed up. I got a good laugh out of that when I found out that that was why the surface of the wig head was all bumpy. The wig head still looks like a head though. I named it Roosevelt and it is now living on top of my wardrobe wearing a green wig, baseball hat, and sunglasses.
Because I stuck to my budget the costume cost about 1-4 USD not including the wig. The wig was about 23 dollars, but I will probably use it for other costumes too.

We had a lot of fun making these costumes and wearing them.