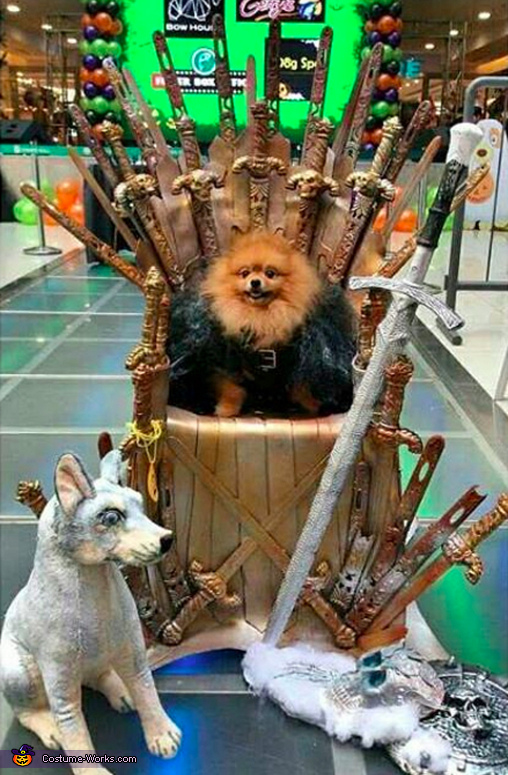 Jacks the Pomeranian beaming in pride as Jon Snow, the Rightful Heir of Westeros

A word from Natasha, the 'Jon Snow' costume creator:

I entered my six-year-old male Pomeranian, Jacks, in the annual fundraising Halloween costume competition of the Philippine Animal Welfare Society (PAWS) on October 22, 2016 where he came as Jon Snow: The Rightful Heir of Westeros. As a fan of the series and especially of the character, I thought of making him the rightful heir of the throne, hence the theme of the tableaux.

The elaborate tableaux consisted of the following do-it-yourself/handmade pieces:

1. A handsewn three-piece costume: a grayish-black gambeson made from cotton-blended fabric, a faux black leather peasecod embellished with a metal buckle on the chest-line, and a black cotton weave cape with faux fur that lines the neck, handpainted for a weather-beaten appearance.

2. The Iron Throne made of a monoblock chair base, thin rubber sheets molded around the surface of the plastic chair that gave the form of the Iron Throne, and Polyurethane Foam Liquid molded into individual swords, blades, and skulls of varying sizes for the outermost layer and detailing of the throne. After attaching one layer from another with glue, the entire piece was airbrushed with mahogany, silver, and gold paint to give it a rustic feel.

5. A paper mache Night King skull and armor covered in cosmetic cotton pads that gives a semblance of the fallen night walker.