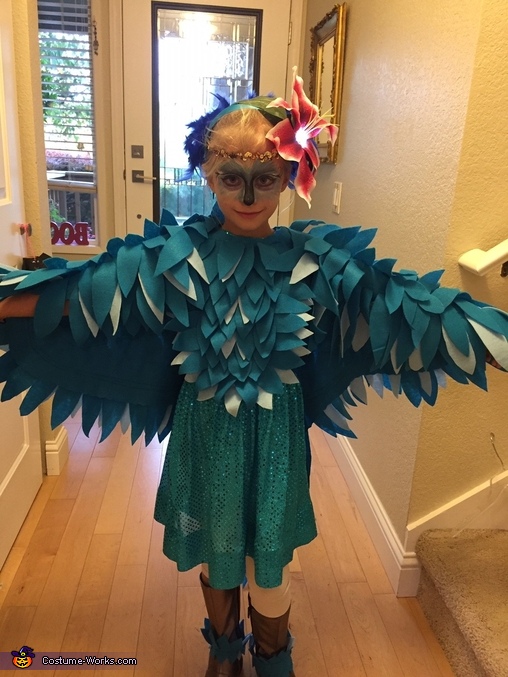 A word from Lisa, the 'Jewel from Rio' costume creator:

Jewel from Rio –
Anya (9) decided more than a year in advance that she wanted to be a blue macaw for Halloween this year. She loves the movie Rio and is inspired by the music and the story behind the birds nearly going extinct. She announced that a blue macaw was her favorite bird and she desperately had to be one for Halloween. I knew creating a costume that represented a blue macaw would be no small feat.
My goal was to take the inspiration and ideas from the little girl who wanted to be Jewel and make it a reality for her.
First, we both went to the fabric store to get ideas on patterns and fabric. Realizing quickly, they do not make blue macaw patterns, I knew that I would have to design the wings and feathers to make the costume a reality. We found the dress pattern and the fabric selected was nylon blue sequin and very sparkly! The dress would be sleeveless with a gathered waist. I sewed the dress altering the pattern for a gathered waist and no ruffles, as it was going to be covered by the wings. The fabric could not be ironed without sequins melting so all the hem and facings were glued with spray fabric glue.
Next, the wings and feathers, a blue felt was chosen to match the dress with lighter blue felt for background feathers. I studied the wing span and back of a bird and diagramed the pattern on paper, same for the front breast of the bird. The idea was to hook the front breast piece at the shoulders to the back-wing span and have a button closure to remove the cape with ease. Also a ribbon on both sides was attached at the waist of the breast front to tie around the child’s waist to secure the wings. I cut the pattern out of blue felt and we were now ready to attach feathers. I cut about 10 different sizes of feathers ranging from 12 inches for the tail to 1 inch for the front breast. The tail and back feathers needed to be pointed and the front breast feathers were round. I pinned the light feathers around the edges first and then sewed them in a continuous stitch. Then followed with the next row covering the stitches and kept sewing row after row until the entire wing span and front breast were covered in feather. Used over 75 feathers for the front breast and over 150 for the back. Feather anklets were also made with cut out felt feathers and a Velcro closure.
Jewel would not be complete without the oversize orchid on her hair. A head band and orchid were purchased and in the middle of the flower a battery-operated led light was installed to light the way on Halloween night.
The Reactions:
Anya wore the costume to both her Halloween carnival at school and out trick or treating. Everyone was amazed by the craftsmanship. The feathers light up head piece and make up really transformed her into the character and the bird. Anya was glowing with pride as she graciously received her compliments. It was a huge hit.