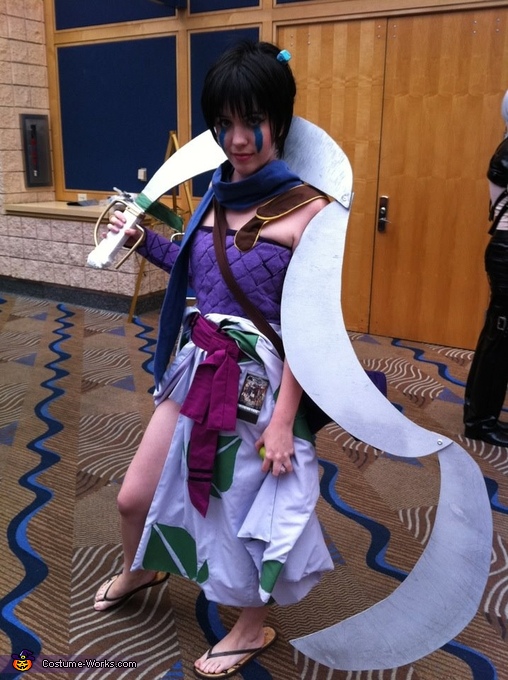 A word from Megan, the 'Jakotsu' costume creator:

I made this costume myself and wear it as myself. It took me a complete year to create it and finish it. I do a lot of anime costume works for myself and others and display my creations at conventions where I mingle with others with similar intrests like mine. Jakotsu is a character from Inuyasha. He is one of seven villans in the arc and is also the quirkiest as well as a transvestite. I had the idea of creating this costume a while back and decided to go through with it. I studied pictures for days and took hours choosing fabric.

The kimono is made from broadcloth doubled so it would not be that sheer. I did use a pattern as a guide so I can attach the sleeves and neck part correctly. The leaves I cut out each piece, wonderundered it onto the kimono and then sewn on each one piece by piece. The whole process took 2 months to complete the kimono.

The scarf was the simplest and is just blue flannel folded over.

The belt is three pieces. The band, the bow and the ties. They are attached by snaps and the ribbon is sewn on as well.

The arm armor is my own creation. I drafted the pattern and used felt squares and sewn on each one onto a darker purple felt. It has a band across it which I used the same idea by sewing on squares. I used a quilting template to give it its sturdy look. The lining is the same cotton at the kimono so it would not get too hot.

The chest armor is a corset which I used the same idea as the arm armor and sewn on each felt square. I worked with boning for the first time and took me forever to figure how to attach it. The strap I added on and snaps. The chest armor zips.

The sword bag is the same as the chest and arm armor. I made the pattern myself and was the hardest to get right and such. I sewn on the straps as well as the strap that goes across my chest. The lining is denim to give it structure.

The sword took me two months and extends to three blades even though on the show it is infinite. It is made out of wood spray painted metalic silver and the handle is wood wrapped in eletrical tape. The guards are copper tubbing spray painted gold.

The wig I am wearing is two pieces and I styled. The hair pin is a chopstick with a bobbin wrapped in masking tape and painted.

In the year I made this I have gained confindence in myself as what I do and want to do as a career. I finally made a costume 100% myself. No going out and buying things or of the like.