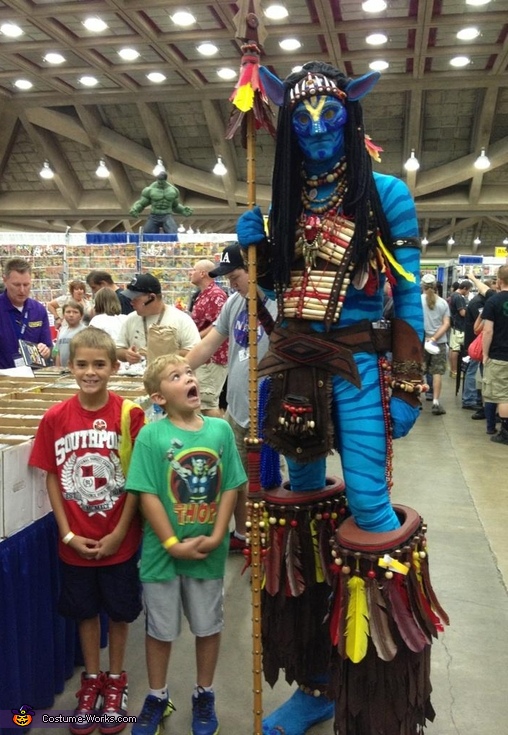 A word from Aaron, the 'Jake Sully from Avatar' costume creator:

My wife Katie and I, along with two other couples (Crystal and Eric Eller, and Mike and Leslie Deery), were hanging out on our patio one weekend when we came up with the idea of planning a group costume for Halloween. Eric quickly made a suggestion, and before we even had a chance to really think it through, we were jumping online and buying blue, striped, Lycra bodysuits.
We had decided to be a tribe of Avatar warriors from the James Cameron movie of the same name!! I quickly called "dibs" on the main character, Jake Sully.

We crafted nearly all of our many, many accessories. The first item needed to complete the costume was a blue, striped Lycra suit. Our friend Leslie also ordered three toy (archery) bows. I bought a basic archery bow from a sporting goods store with plans to "bedazzle" it also. Eventually I would also buy white cotton gloves (which I would color blue) because painting my hands proved problematic (the body paint would always flake off very soon after application due to unavoidable finger flexing).

That’s all we bought (besides crafting supplies) during the Avatar transformation we undertook. As it would happen, our guys would need to tailor the bodysuits we bought (the gals’ bodysuits fit well "as is").

In the days and weeks that followed, the six of us engaged in a competition of sorts, with each couple trying to "out-do" the others, with additional accessories and more elaborate costume decoration. Thus it was perfect that we were dressing as Na’vi warriors. In the movie each character had a unique look with varying attire. Much to the ladies’ satisfaction, and to me as well, we really couldn’t worry about accessorizing too much!

We would call each other with updates regarding our progress, and we actually got together a couple of times for designing/crafting meetings. At these meetings we shared ideas about materials and construction, but we also showed off the progress we’d made.

Over a span of weeks all six of us continued to work diligently on our costumes. Our friends spent so much time creating their outfits that their kids actually complained of being "ignored" and not having "structured" family meals (and I thought that most kids just wanted their parents to leave them alone!) We also planned some division of labor: I made spears for all the male members of our tribe, and Leslie decorated three toy archery bows for the ladies. The six foot spears I constructed were made of plastic PVC tubing for the shafts and cardboard for the spearhead (my hope was that no bouncer could deem them to be too dangerous to admit to their club).

Another time, at the 2014 Baltimore Comic-Con, the costume contest created a long line for interested costumed characters. As each of the over two hundred fifty participants reached the front of the line and was called up on stage, the announcer asked him or her for their name and the name of their costume-character. Then each contestant was asked if they had anything else to add. I didn’t actually hear anyone who had something interesting to say at that point.

I, on the other hand, had completed some research about cosplay. I had memorized the rally speech Jake Sully used to prepare his Na’vi tribe, the Omaticaya, for battle with the technologically superior humans.
Employing the loudest, deepest, most booming voice I could muster, I belted out:

"The Sky People have sent us a message... That they can take whatever they want. That no one can stop them. Well we will send them a message. You ride out as fast as the wind can carry you... You tell the other clans to come. Tell them Toruk Makto calls to them! You fly now, with me! My brothers! Sisters! And we will show the Sky People... That they cannot take whatever they want! And that this... this is our land!"

When I was finished, the crowd, which had been intensely and silently focused at me on the stage, burst in to raucous applause. They hollered and cheered and roared for about thirty seconds. The audience response far exceeded what other contestants received, as far as I saw.

Many people came up to ask for a photo-op after the contest. Some would come up to me and say something like, “Wow! You look amazing! You’re really tall.” Then some of those people would actually continue on to ask, “Are you wearing stilts?!?” I would say,”Nooo! No. No stilts. I’m actually seven-six. I play basketball for the (Washington) Wizards. I’m Drew Gooden (whose name I had pulled off of the Wizard’s team website). I introduce myself with this pseudonym a few times and people who actually recognized the name appeared to be duly impressed. Some would say, “Wow! And so today you’re just hanging out with us regular people! Very cool!”