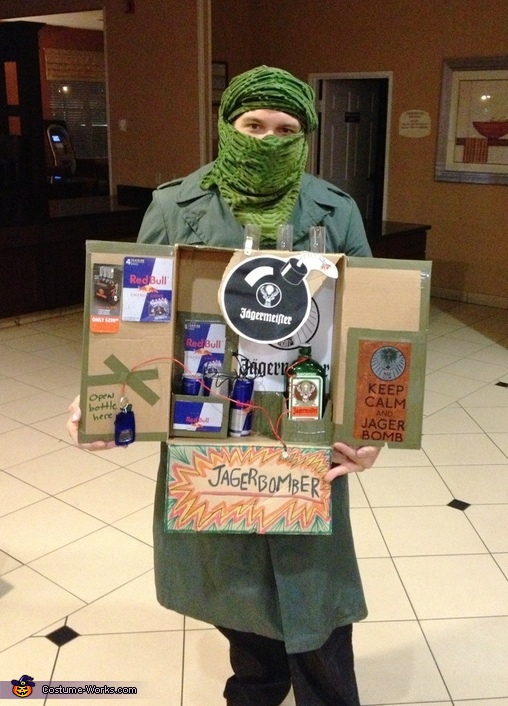 A word from Kevin, the 'JAGERbomber!' costume creator:

This costume is over a couple years in development. I had the idea in college, and never made it to the party, still had a great night, with a woman who is now my fiance. I really wanted to capture my military side, my LOVE for Jager, and some Red Bull action to keep me awake and drunk. **Drink Responsibly!**

Jager is an amazing drink, I frequently drink it straight. I wanted to have something unique, something that is a tribute to jagerbombs, and came up with the idea for a Jagerbomber costume. I have attached many photos during the development process.

Issues I encountered and how I corrected them:

1. Keeping the doors closed - I used a piece of scrap metal, that is fairly pliable to pinch down the top of the door.

2. Keeping the bottle and red bull in the box - I wanted to still be able to access these, so i didn't cable tie them down, I used cardboard from another box to create a "holster" for the jager inside the box, with a bunch of 100mph tape (duct tape) I then cut a triscuit box in half, and taped that in to contain the red bull cans.

3. Shot glasses storage - I wanted to be able to store and pour shots while wearing this "bomb" I cut slits perpendicular to one another in the top, like a cross, and shoved the shot glasses inside for a tight fit in the top of the box.

4. Decals/Insignia locating - I used the box that my redbull came in, a 4 pack, and cut it up for placement of the redbull logos around the box. I used printed images from google for different Jager logos.

5. How to get into club with a full bottle of Jager, and cans of RedBull - I thought a while on this one....I ended up dumping the jager into a pitcher, and keeping that in the car, I then filled the Jager bottle with water...and when the bouncers checked that it was water, I was in the club. I left for a "smoke break" and refilled the Jager bottle with Jager from the pitcher, and breezed past security the second time in ;) Didn't have to big of an issue with bringing full cans of Redbull into the club, since they were "props" ***Disclaimer, I don't condone this, this was just how I got past security..haha***

Notes:
I wanted to add a bottle opener on the side, just in case. I also added a lighter on a string, cause you always seem to need to burn things when Jagerbombing! haha I used the small green and red squirt bottles to store small amounts of redbull and jager in my pockets going in, just until I could get outside to fill the bottle, (see # 5.)