Jack and Sally
by Anna 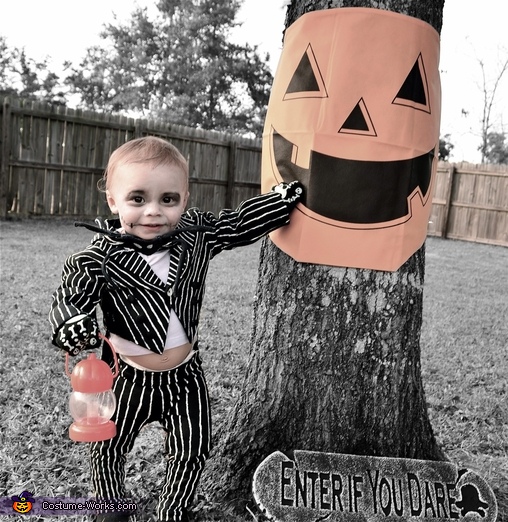 Toddler Jack Skellington from The Nightmare Before Christmas

A word from Brandi, the 'Jack Skellington' costume creator:

This Halloween my son, Spencer, is dressed as Jack Skellington from The Nightmare Before Christmas, who is also lovingly referred to as "The Pumpkin King."
His costume is homemade. I altered a cheap tux jacket to fit him, and did the pants. I also made his tie from scratch using floral wire, cardboard and an old t-shirt. Once I finished making the outfit I hand painted each white stripe on the jacket, pants and tie.
The background is inspired from the movie as well, from the scene with all the holiday door trees in the forest (which double as entrances into the different holiday "worlds").
I took the photos with my camera, and edited them trying to make them look as much like the fantasy world in the movie as I could, hence the black and white backgrounds, low saturation and high exposure in the pictures. The overall cost for making our outfits, makeup, and this scene was $17, and I intend to reuse the props and pumpkins as Halloween decorations around the house :)
The inspiration behind the costume was my husband, it was his favorite movie, and he had every last word and song memorized! He even did great impressions of every characters voices. The love of this movie was one of the things that connected us when we first met. It seemed only fitting that our son would be Jack Skellington "the Pumpkin King" this Halloween.
We had so much fun playing in this little fantasy world all afternoon and pretending to be "in character", and I can't wait for our next opportunity to dress up for a holiday :)
Happy Nightmare Before Christmas everyone!