Little Jack Skellington and his dog Zero
by Donna 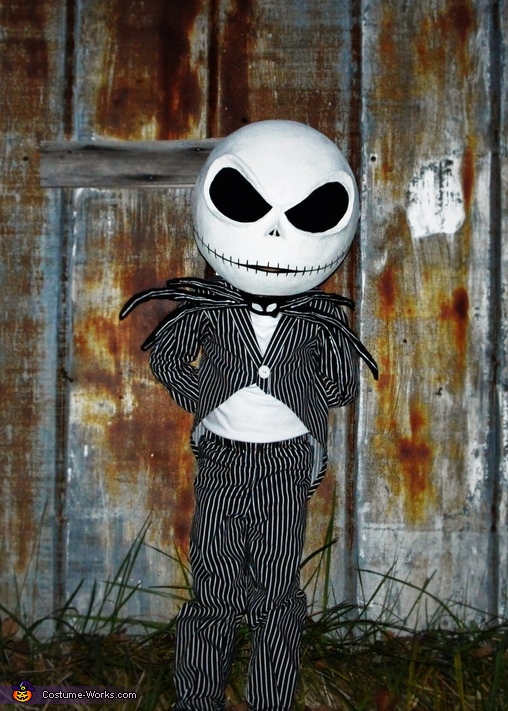 A word from Emily, the 'Jack Skellington' costume creator:

My son is rocking the best Jack Skellington Costume i've ever seen, that we hand made. We started by making a paper mache head, using a large punching balloon, ripped newspaper and diy flour and water paste. We added about 4 layers, drying a day between each layer, and then drew and cut out the eyes and a small mouth hole with an exacto knife. I added lots of foam to the inside like a helmet so it wouldnt wobble everywhere. I made a diy sculpting clay out of corn startch, baking soda and water and built out his eyes, cheeks, nose and carved out his nostrils. I added a few more layers of paper mache and then sanded the whole thing with fine grit sandpaper. I painted the whole head with flat matte white and added the black for his mouth and nostrils. We made the suit out of a pinstriped gangster costume and just altered it to look like jack skellingtons suit. I made the bat tie out of felt, floral wire and hot glue. I added the eyes and lines on the bat with fabric paint.
After the costume was finished I took him to my parents with my nice camera and we did a spooky photo shoot. All the pictures turned out super good and super spooky I wish I could turn in more than 10! His whole personality changes and he moves and acts like Jack Skellington with this costume on. I LOVE how this turned out!!