It's My Party and I'll Die if I Want To! Costume 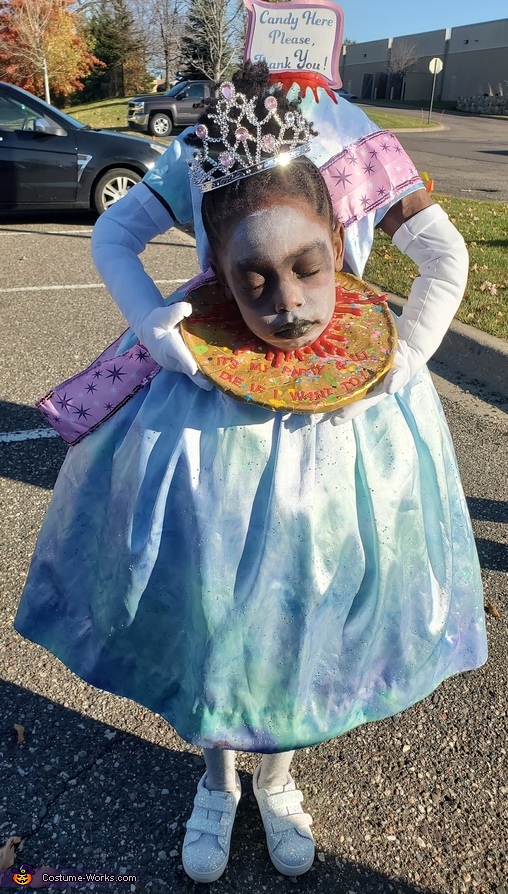 It's My Party and I'll Die if I Want To! Costume

A word from Michelle, the 'It's My Party and I'll Die if I Want To!' costume creator:

My daughter, Anita Renee is a fearless five-year-old with a super dominant personality and a caring spirit. She's my diva sweetheart with a dramatic flair. I say fearless because from bugs, to the dentist, to horror films, she is usually not afraid. I think things that scare most kids spark Anita's curiosity rather than fill her with fear and she just wants to learn more about them. She hasn't seen many scary movies due to her age, but she is already drawn to them by their characters' creepy aesthetics. She's shown interest in Annabelle, Chucky, Slender man, and Jeff the Killer to name a few. She also talks about "It" and Pennywise as if they were her creation. To sum it up, when I came across this idea on google and shared it with Anita, it was a no-brainer and she was on board from the beginning.
I started with plenty of research and positive thinking. I already had a lot of the materials at hand and most things purchased came from Dollar Tree, my local thrift stores, or clearance racks/shelves at Walmart or Target. Some things weren't bought or found at home. Walgreen's sells shirts that come on wire hangers and since they just get thrown away the cashier let me take what I needed for free, I got my newspaper for the paper mache off of the free magazines/ads stand on my way out of the grocery store, and I repurposed some tool from my senior prom dress and sewed it into the costume dress to hide Anita's body better.
I went with a "Birthday Princess" theme so I needed things like the foam disc for the plate, alphabet stickers, a tiara, and a sash; the materials needed for the costume's main/basic components included a long poofy dress, some sort of filling, paint, long gloves, PVC piping and connecting elbows (and cutter) for structure and height, duct tape, long sleeve shirt, glue gun and sticks, backpack, newspaper, liquid glue, wire hangers, and other measuring/marking/cutting tools. There is a fiber-filled, painted paper mache torso attached to PVC piping, which is inserted into a small backpack and reinforced with duct tape. The arms are stuffed with fiber filling and a couple of bent wire hangers for support and attached to the arms using hot glue. a hole was made at the waist seam and then it was all about the assembly and the aesthetics. alterations were made along the way and accessories were added to complete the look. The perfectionist in me says it still needs more work, but the performer in me says the show must go on!
I worked a bit sporadically so things weren't done in any kind of order and overall and I had to spend 20+ hours working on this. Overall I think I spent a little over $60 from start to finish. I could have spent less, but I bought some things that I didn't need like a couple of extra dresses just in case or buying more of something just so I didn't have to go back to the store. I would call it a success! The costume seems to be a huge hit and Anita plays the character almost too well. Thank you for reading and I hope that you are more than impressed with the work put in and the overall outcome.