The Hunger Games Leaders
by Bradley 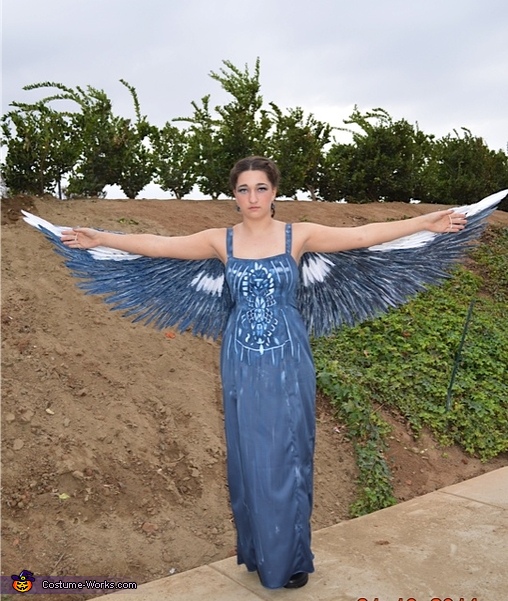 A word from Kendall, the 'Hunger Games Mockingjay' costume creator:

So, a little more about me Kendall Veronick, I choose costumes for myself and for other people based on how similar their body types are to the character they would like to portray; things like features and body structure. I chose Katniss for myself for a few different reasons; the first one of course was because I really really love the Hunger Games movies, I wouldn’t say I’m a crazy fanatic fan girl but I do appreciate how well the movies are done. The second reason was because we have similar features and a similar structure. I think I might as well throw this in here, my whole family loves Jennifer Lawrence, I think she’s a great actress and we love her personality; my family actually says I’m a lot like her, but that’s just how they see it. I haven’t read the books to the Hunger Games, but I’m considering making more Hunger Game costumes so I'll more than likely read them.
Making costumes for me is about the challenge it presents; it’s fun for me to figure out how to make things work, like the wings. Altogether, I used roughly 1500 feathers, so you can imagine how tedious it was to dye, dry, comb them out and glue them all on individually. The huge challenge was what made me want to make the MockingJay costume. I thought the wings would be a fun experience, the dress was pretty basic and didn’t take long but, I was sewing with a new fabric, I had never used before so it was a bit of a challenge. I used ultra-suede, but it was inside out so it didn’t look like suede.
Personally I find there is always a couple things I want to change about the costumes I make. I’m a perfectionist so I’m really hardly ever satisfied with what I'm trying to create. For my Mocking Jay dress there was three things that I can think of that I didn’t like and wanted to change; first was the fabric, in almost every costume I’ve made I haven’t liked the fabric. Second I needed to make the bottom of the dress looser, it was too stiff and made it weird to walk in, lastly was the wings. They look fine but again perfectionist that I am, the dye we used didn’t make the feathers dark enough to suit me but, I didn’t realize until I had already glued on all the feathers so we tried painting it and I didn’t like the way they looked.
In making the costumes I always have help from my mother and sister, when they feel like helping. I usually direct them, explaining to them what I want and how to do it, and what materials to use, etc. They are very helpful if you have them doing the right things, my mother helped with the wings, but because of the way I am I had to re-due it.
Now, moving on to wearing the costume; I’m not use to wearing earrings so I wore those for a while beforehand to get use to them, the dress was comfortable but I’m afraid it didn’t keep me very warm, the wings were nice they weren’t stiff and they moved perfectly with my arms.