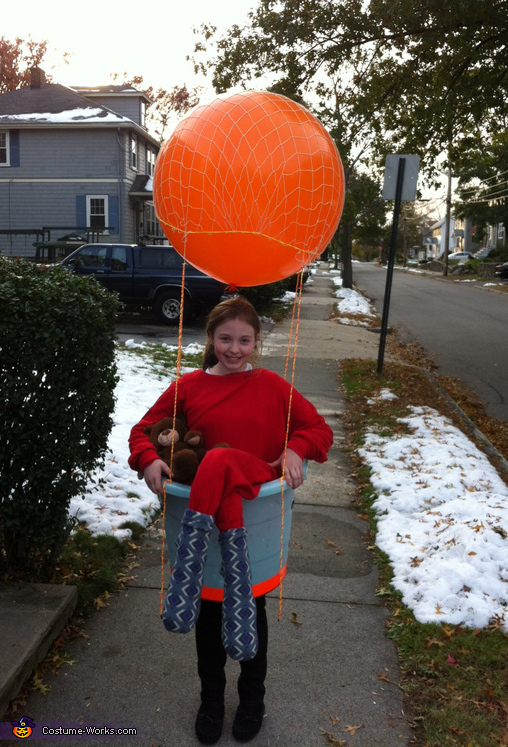 A word from Lucie, the 'Hot Air Ballonist' costume creator:

Lucie Coleman is wearing the costume (That's me). I got my inspiration from a Cirque de Soleil video that I watched on YouTube a few months ago. Right away, I told my dad that was what I wanted to go as. For the balloon basket, we used a plastic storage bucket that we had. It had a crack in it so it was perfect for recycling as a costume! We cut the bottom out and then cut some slits around the sides so that it could be held up with my belt. The ballon strings are masonry string. The ballon and netting were the only things that we had to purchase from a party supply store. Instead dressing as a clown, I used my dads red union suit (long underwear) Since we thought that it looked like I was wearing PJ's, I added a teddy bear to complete the look! For the fake legs, we used one of the foam pool noodles that we had. It was easy to cut and very light. I always like coming up with creative ideas for costumes that I can make with a little help from my parents. I have to say, this will be hard to top next year. Every where we went, people were telling me that my costume was the best they had ever seen. In fact, when my dad was taking this picture, a lady driving by in her car stopped to tell me how much she like my costume and how creative she thought it was!!