The Simpsons
by Amie

Homer and Marge Simpson
by Tammy

The Simpson Family
by Stephanie 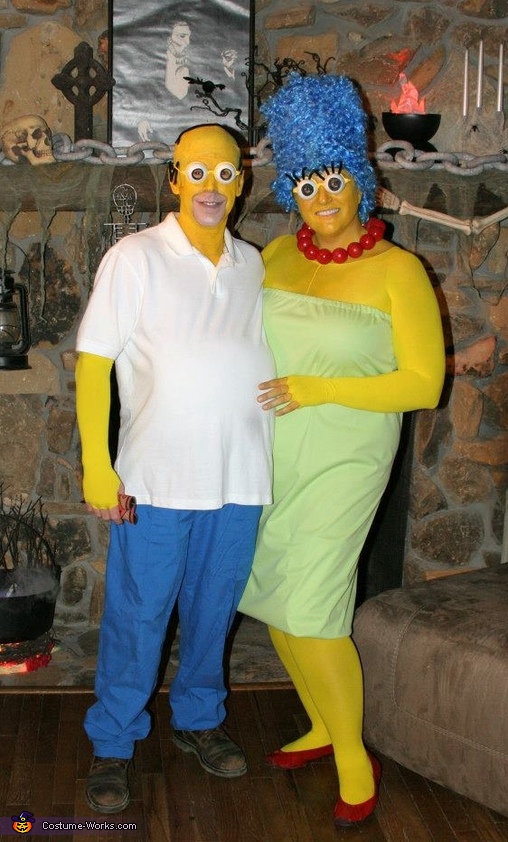 A word from Kendall, the 'Homer & Marge Simpson' costume creator:

Homer & Marge Simpson are being played by Jay & Kendall Paul. These are homemade costumes. I used three pairs of yellow tights ($10 each). One pair was used as actual tights for Marge's legs. One pair was altered by cutting a hole for my head so they could be worn as a top coloring my arms, chest and shoulders yellow. Small holes were cut for each finger to come through. The final pair of tights were cut to create Homer's arms. Homer's clothes we found at a Goodwill store for $8 and his boots were from our closet. Marge's dress was made from fabric. Simple dress with elastic at the top and a couple of darts. (Material was $10) The blue wig was purchased for $23. We used Mehron Paradise Yellow body/face paint for $10 and colored our faces, necks and Homer's bald cap ($2). I bought 1 pack of black pipe cleaners ($2) which were used for Homer's hair & Marge's eyelashes. Our eyes were made by using two sets of kids round nerd glasses with the lens popped out.I sprayed them yellow (glasses $5 each, yellow paint $3). I wasn't happy with the ear pieces, they were small and not comfortable, so I removed them and sewed a small yellow strip of elastic to each lens hole so they could be worn like goggles. I cut small styrofoam balls in half and cut eye holes in them. I colored black around each hole and glued them to the eye glasses. I used some of the black pipe cleaners to make her lashes. I used a small pillow with attached elastic for homer to wear under shirt for his belly. I had an old pair of black flats from a previous year's costumes and sprayed them with red spray paint. Finally, I purchased a pack of ping pong balls and spray painted them red. I them poked a hole in them with a small screwdriver so I could run a small elestic cord through to create her necklace. We also bought a Duff can koozie for homer to use for his beer.