There's nothing scarier than creepy, crawly bug costumes for Halloween!

Let's face it, there's just nothing scarier than creepy, crawly bug costumes for Halloween. How do I know? Just take a look at some of the most gruesome horror movies! 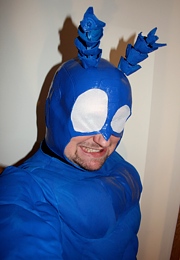 Who can forget 'Arachnophobia' with all those horrible spiders crawling around and attacking people? And what about Jeff Goldblum when he turns into 'The Fly'? And don't forget that creepy feeling you got when you watched 'Infested', the movie about TICKS!

Even a person with no phobias whatsoever gets a good case of the creepy-crawlies when he watches bugs and insects crawling over, around, and in some cases inside another human being. So it only makes sense that if you really want to creep people out, bug and insect Halloween costumes will get the job done nicely.

More than 55% of all females and 18% of all males have a serious case of arachnophobia – the fear of spiders. These people don't just 'not like' spiders – they're absolutely terrified when they see one. With that thought in mind, wouldn't this be a great Halloween costume? You'd automatically creep out more than half the people at the party as soon as you enter the room!

Many people also despise flies. They're ugly, vile little buggers and they vomit on everything they touch. Dressing up in a homemade common housefly costume isn't as difficult as it sounds, either. At least you don't have to build one of those time travel machines!

For some people, flying insects are their greatest fear and they'll really get the heebie-jeebies when you show up in this homemade Dragonfly costume or arrive carrying a big Red Moth on your back.

Personally, I'm freaked out by anything that has a large number of legs. Whether it's big, Black Widow Spiders or itty-bitty ants, if it creeps and crawls on more than 2 legs, I'm outta here. And there are a lot of people just like me who'd be terrified by someone in a Walking Stick Bug costume. Seriously. I can hardly stand to look at the picture. Eeeek! I feel something crawling on my leg! Get. It. Off!!

Halloween bug costumes don't always have to be scary. In fact, most people think Lady Bugs are kinda cute, like this Little Lady Bug costume. Letting your child dress up like a Lady Bug or Bumble Bee is a good way to ease them into the creepiness of Halloween without them getting too scared. Like this little tike in his Baby Bumblebee costume. Isn't he just as cute as a... well, bug?

Below are great homemade insect costumes, from the insect theme created by Heather Smith. She sent these costumes to our 2011 Halloween Costume Contest, and we were amazed by originality and availability of her costumes! For those of you who would like to make insect costumes, Heather included detailed instructions and illustration chart for each of her "insects".

Click on the thumbnails below for a larger picture and instructions:

If you're looking for a homemade Halloween costume idea that will give everyone you meet a severe case of the creepy-crawlies, just take a lesson from these bug costumes. Add 8 legs, a couple of extra eyes, some papery-wings and a stinger and you'll have a creepy insect costume to freak out everyone at the party!