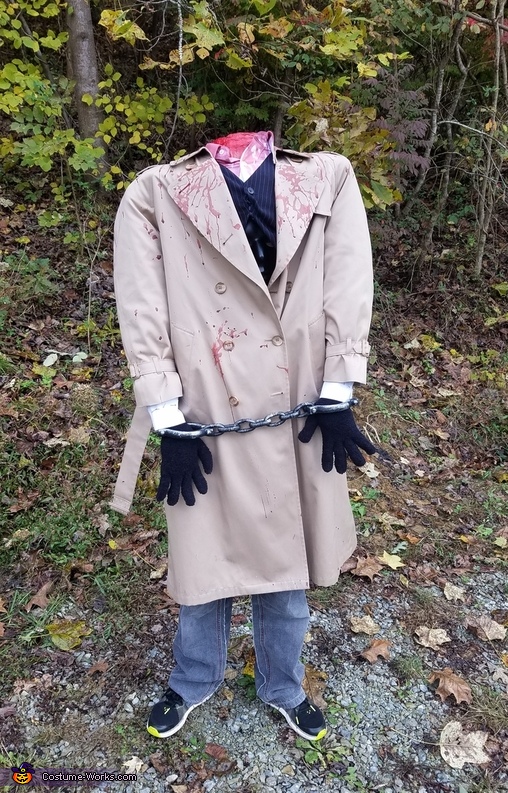 Not just any headless man a headless lawyer

A word from Ashley, the 'Headless Lawyer' costume creator:

The headless lawyer worn by Brett Berry Jr. (12yrs). He was playing with a decapitated head out of my Halloween decor and arose this awesome costume ideal. At first I wanted him to hold his head in his hands like around his waist and he didn't want to do that and I'm so glad we went with what he wanted because his costume was a hit. I honestly can not tell you how many people stopped and asked to take a picture with him. We went to the thrift store and got the coat for $6.49 and the white button up for $3.99. Purchased a plain black face mask from a Halloween store for $4.00 a .99 cent pair of black gloves, and fake blood. I spent $7.50 on the blood but only used a very little on the costume. All other materials that were used i already had around the house. Duck tape, flour, water, newpaper (for paper mache), hot glue gun, cardboard, cotton balls, white glue, red paint, shopping bags lots of them, needle and thread, and a pool noodle. Made the neck and shoulders out of the cardboard and paper mache. On the top of the neck to make it look more realistic we used cotton balls socked in white glue. Under that we measured his head with a pool noodle and duck tapped the noodle the the neck, instant headless guy hat lol. Then we just painted and put the clothes on the shoulders. For his face to blend in with the shirt and coat I found a black vest in his closet and added it to the costume. I just tacked the black vest together in the front to cover up the rest of the pool noodle. Tacked back the vest and shirt where his face was so when he put it on he didn't have anything in the way of sight. tacked the gloves to the cuffs of the shirt. Filled the sleeves with empty shopping bags and also used them to add to the shoulder so it looked more realistic. All he had to do was put the black mask on and slide in to it. Fastest costume to put on ever with the help of another. And keeps you warm too lol. Taylor cost out of pocket is $15-16.00