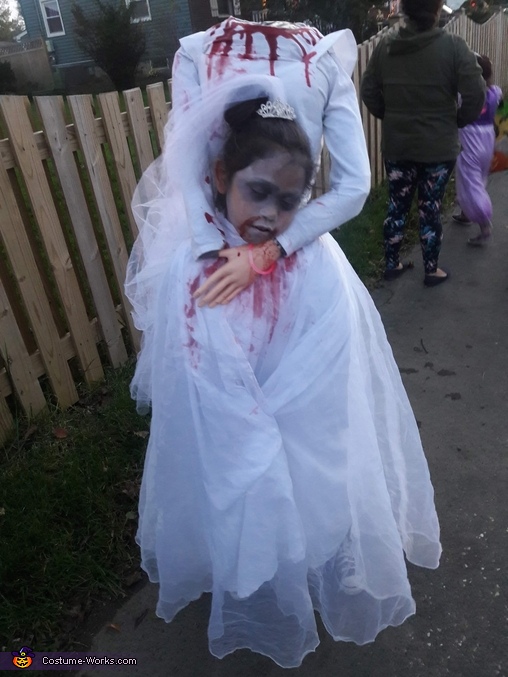 A word from Carla, the 'Headless Bride' costume creator:

The costume came form a video floating on the internet that caught a dears sisters attention. My sister has not celebrated Halloween with the family in over 10 years and she lives the holiday through us. The original video has a child with a Sunday dress walking around headless but we decided to do a bride. My 7 year old decided she wanted an awesome costume and that's what I tried to give her. The costume was made using duct tape for the torso which my oldest daughter volunteered and became our template. I made a cut through the back which I then duct taped the incision :). Stuffed the torso with news paper and attached to a small child's backpack to carry, also with duct tape. I used tubes from Dollar Tree Christmas ornaments we had just disposed of.. stuffed those with news paper and added a hand from a very generous beauty student. I ended up using a long sleeve shirt to cover the duct tape and tubes and fitted the dress right over that. I ended up making a cut out in the belly for my daughters head to go through. the last piece was a veil to cover the cut out and face paint for the head along with some blood.