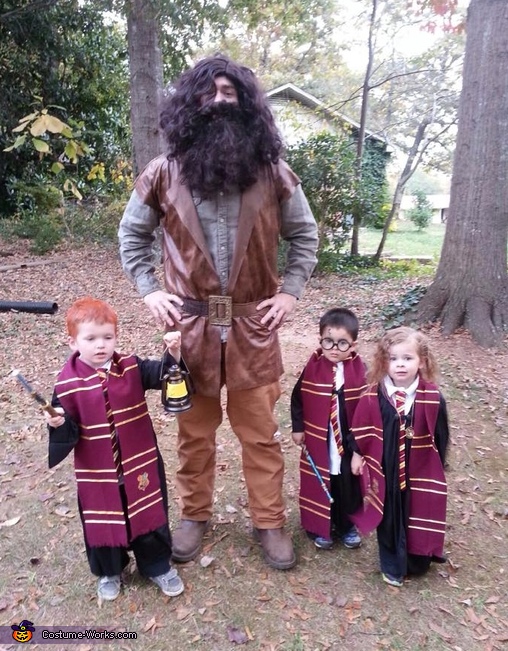 A word from Debra, the 'Harry Potter Characters' costume creator:

My son has begun to read the Harry Potter series to his children... at first I was only going to make them wands; but, then it hit me since there were two boys and a girl that I would do costumes for them and it would be a great halloween costume. The picture is of my Grandson Townes (red/orange hair as Ron Weasley), Grandson Mateo ( black glasses as Harry Potter), and Granddaughter Abi (as Hermione)... those are the costumes I made. My daughter in law put together my son's costume as Hagrid... which was a perfect touch.
I only made the scarves, ties, and wands. I would have made the capes but found it was a lot less buying them on Amazon along with the glasses, Hermione's necklace and lantern.
The scarves were made of felt, ribbon and a hot glue gun. At the bottom, I cut the fringe and I also copied the school emblem off the computer, glued it on, then put several layers of modge podge to harden it, and outlined it with fabric glitter glue. For the ties I used some satin blend fabric I had, ribbon, glue gun and card board. I cut a tie shape out of the cardboard, ironed the fabric to help it take shape and then glued it on in two piece, folding over the ends in back and tacking with needle and thread. The top of the tie was done separately so I could add dimension by folding the fabric over the bottom piece. I tacked and glued a long piece of ribbon to the top back part of the tie so it could be tied around the collar of their shirts. I also used fabric paint to write their initials on each of their items so they would know who's is who's.
The wands were made with a wood dowel, paper, hot glue gun, paint and a small flat clear marble. By rolling the dowel in the paper at an angle, I could get the back of the wand larger then the front, I used the glue gun to fasten it in place. I then just hot glued designs onto the stick. I fastened the marble to the front of the stick with the glue gun and designed it like a claw holding it on. When the glue was good and hard, I then painted it.
All together with using coupons to Joann Fabric... the cost was approximately $20-$25