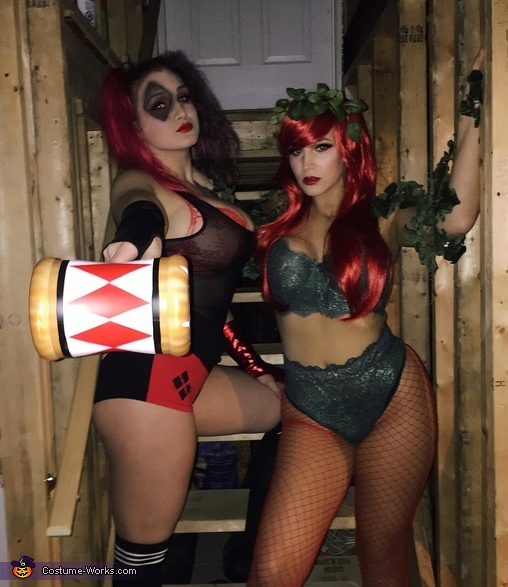 You’ll get an itch sooner or later

The costume is worn by me and my best friend. We thought of this idea one year ago (last Halloween)... we always plan way too far in advance. We both LOVE to dress up. The idea came from our love of Marvel/DC and an inside joke (we always call eachother “boyfriend”). Harley Quinn and Posion Ivy are known to be lovers and best of friends. The couple is crazy and weird, just as we are!

Harley Quinn:
-comic book version, not movie. We did not want to be like most Harley Quinn’s out there.. always different
-shorts from hot topic (price unknown)
- knee high socks and top with bra = pre owned
- funny story with her hair... she HAD platinum blond hair, HAD. She went all out and dyed her hair fully red thinking it was temporary, but it wasn’t! It was really funny and sad at the same time.
- half hair black with Halloween spray dye
- pale face using baby power, Halloween tattoos and makeup
- the hammer is from party city

Poison Ivy:
- the red wig is from eBay ($30)
- the green outfit/ lingerie is from Victoria’s Secret Christmas line (yes I bought this during Christmas of last year for the costume, like I said, we plan in advance)
- red fishnets ($7) from spirit
- ivy leaves in hair and arms is from Michaels ($14)

The goal we were going for when taking these pictures is “the crazy girl” and “the seductress” as that is what Harley Quinn and Posion Ivy portray.