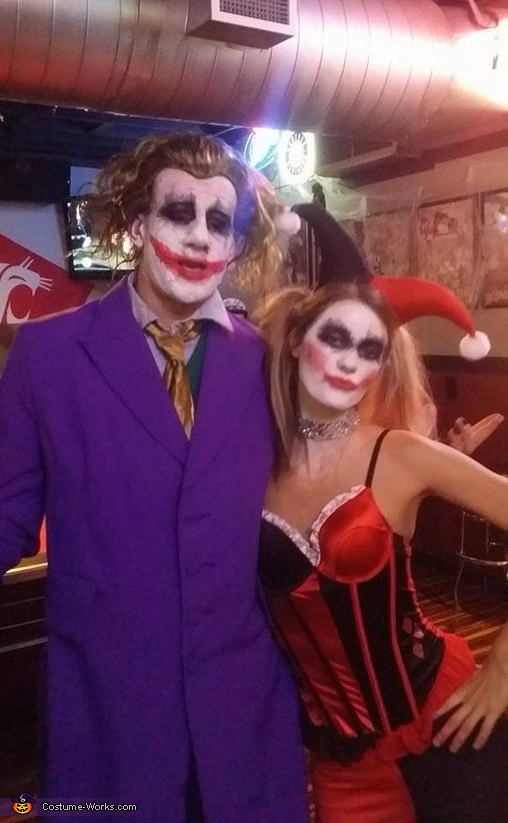 A word from Valkyrie, the 'Harley and Joker' costume creator:

Me and my boyfriend decided to go for the matching halloween costume route, but we had to make sure it was something awesome we could also wear for Comic-Con in San Diego (winning would help pay for our plane tickets!). So we decided to go for the Joker and Harley Quinn, one of DC Comic's most famous villain couples.

My boyfriend bought the complete suit online and we spent HOURS watching makeup tutorials to make sure his face looked as legitimate as possible! We purchased custom made prosthetic scars, applied them with spirit gum and then spent over an hour applying liquid latex to blend it in seamlessly with his face. We then covered it with white cream makeup, went over his mouth and scars with greasy red cream makeup, then played a trust game when I was going around his eyes! We spent a lot of time smearing and blending, making sure he had the wrinkle marks on his forehead and eyes to make him look as good as the Joker himself!

For my costume, I put my hair up in pigtails, teased them a lot, then lightly sprayed black and red onto each side to represent Harley Quinn's hairstyle. I used the same white and red cream makeup, but it started to flake off on me, so I decided to go for a crazy Joker version of Harley Quinn, so ours matched and we both looked devious. Lipstick on the edges to make it look like I had a smile constantly and black smeared makeup on the eyes and we were ready for our night out! I purchased a corset and matching leggings, then had long black boots and a silvery collar.

Our costume was a success and we won a local contest for best group costume! Every time we saw someone dressed as Batman we role-played a little, we got really into our characters!