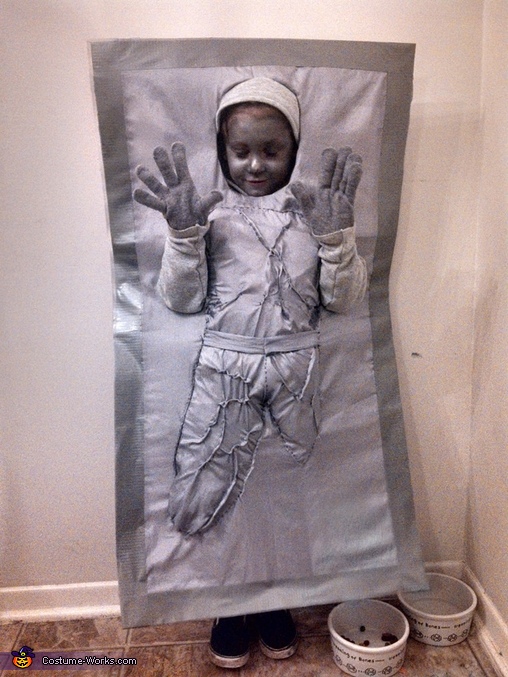 This homemade costume for boys entered our 2013 Halloween Costume Contest, in the Best Children's Costume nomination!

A word from Rustyn, the 'Han Solo in Carbonite' costume creator:

My son has been obsessed with Star Wars for as long as I can remember. This is his Han Solo in carbonite costume.

What items did you use to make this costume? And how?
The ingredients to making Han Solo in carbonite:
Duct Tape
3 sheets of plastic canvas
yarn
Shiny Grey material
More Duct Tape
Newspaper
LOTS of Duct Tape
Staples
Skewers
Ribbon
Metric Ton of Duct Tape
Grey Sweat suit
Grey gloves
Grey eye shadow
Is there any Duct Tape left in the universe or is it all on my kid's costume?!?!

First thing, I used yarn to tie the three pieces of plastic canvas together. Then I made my son lie down so I could figure out where to cut the face and arm holes. I cut the holes and then put duct tape around them so they wouldn't be sharp. Then I put the material over the whole thing and secured it on the back with duct tape. Then I turned it over so I could see where to cut the fabric for the face and arm holes. After that, I duct taped down the fabric. Next, I folded and crunched up some newspaper to form the body. then, after fabric glue failed, I hand stitched the top part on and then hand stitched the details on the top. After that, I rolled up more newspaper and made the legs, hand stitching those as well and then stitching in the crinkled details. I studied Han Solo in carbonite to make sure I was doing it correctly. After the torso and legs were to my liking, I made the belt by rolling a piece of fabric, ironing it, creasing it and then stitching it on. Then I used! duct tape around the edge to create the frame. I attached ribbons to the back to create ties at his waist and his neck. After trying on the costume, it was not sturdy enough at the top so I used bamboo skewers to reinforce it and then topped it with more duct tape. Deciding that duct tape may not be as rigid as I needed, I then stapled the perimeter of the costume and around the face and arm holes and, of course, covered those areas again in yet more duct tape. (did I mention duct tape yet? :)) When it was go time, I decided not to duct tape my kid's head and used dark grey and light grey eye shadow instead.