Guardians of the Galaxy Groot
by Frank

Guardians of the Galaxy Groot Costume 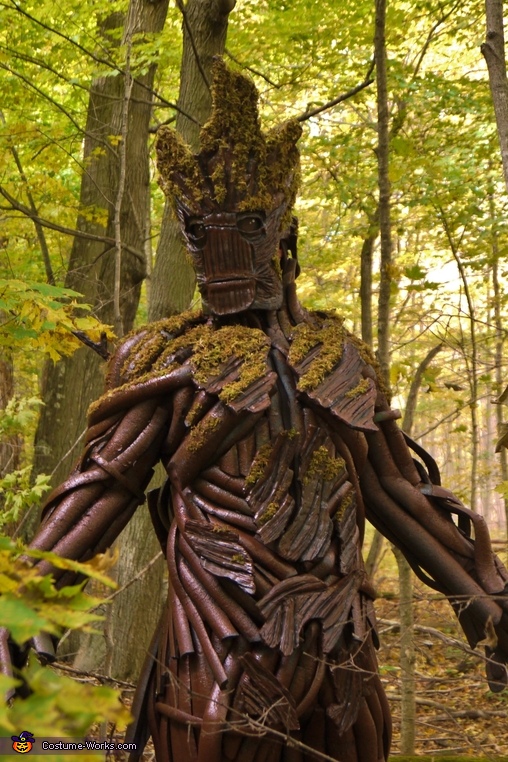 A word from Zachary, the 'Guardians of the Galaxy Groot' costume creator:

This costume is based on Groot as he appears in Marvel's "Guardians of the Galaxy" film.

The costume took months to make and cost approximately $250-$300 overall.

I built the entire piece around a mannequin that I had made that was identical to my body size and shape.

The mask was created using interlocking foam floor mats. They were cut, hot glued into place, then carved and shaped with a dremel. The eyes were cut from a small, metal pencil tin (with lots of tiny holes in it so that I could see reasonably well) and glued into place. The the eyes were then painted. A hole was cut in the mouth to allow me to drink water with a straw while still hiding my face.

The body was a hoody that was painstakingly covered in foam pipe insulation by using hot glue. Pieces were cut, woven, and glued into place to replicate the appearance of vines. Large plates of foam (like the mask) were cut and dremeled to create the muscular-like plates of bark in the chest, abs, and back of the body. These were attached with Velcro to allow flexibility and to hide the front zipper of the costume.

The legs were athletic pants that were given the same treatment as the body. Foam plates were attached to the upper hips in the same fashion as the top plates.

Gardening gloves had foam attached to lengthen the fingers and meld in with the wrists of the main body sleeves.

The feet were essentially enormous platform shoes. A pair of sneakers (with good ankle support!) were glued to a stack of 12 flip-flop soles with shoe cement. Then, expanding insulation foam was sprayed in a root-like fashion to cover the shoes and provide a bulky appearance. Finally, pipe insulation was added to the the exterior to better match the upper parts of the costume. The shoes were extremely light-weight and easy to move and dance in.

The overall costume was then painted with many coats of Krylon spray paint, as well as hand painting for an illusion of highlights and shadows. A clear sealant was used overtop. Moss was then glued around the mask, shoulders, bark plates, and parts of the upper body vines to complete the look.

The costume was extremely hot, but very lightweight and easy to move in (though paint flecked off like crazy due to the vines rubbing over one another). Vision was good, but peripheral was limited. Stairs were my worst enemy, as were door frames and low ceilings, as the costume made me stand over seven feet tall!

But man could I dance in it!