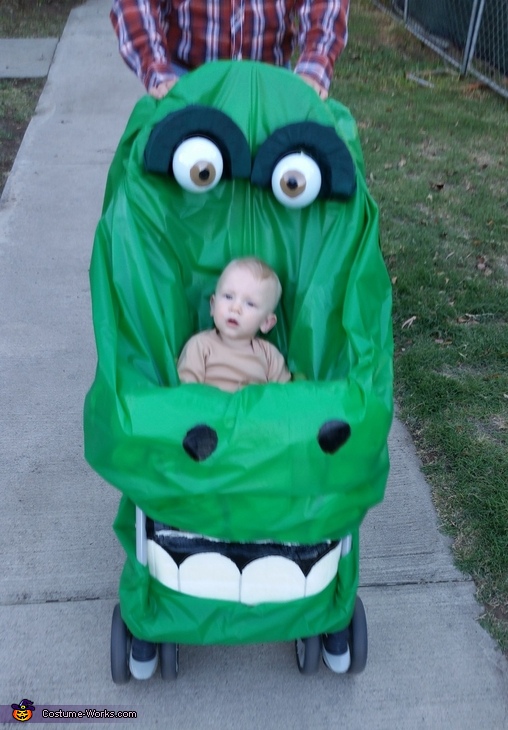 A word from Mary, the 'Good Dinosaur' costume creator:

This is my 1 year old son dressed as a little caveman (nude shirt and pants under fabric leaf & twine "skirt") riding his stroller which we turned into a dinosaur. i was trying to think of what would be popular around this time, and Disney is always a reliable go-to even though the movie (The Good Dinosaur) didn't premier until Thanksgiving. My mother ( a talented, self-made seamstress) helped with the nude shirt and pants (found an adult-sized small, long-sleeved nude shirt at Goodwill and used that as the fabric). I used plastic green table cloths from Party City for the dino-stroller skin (after considering a much more realistic lizard-scales print fabric which was unfortunately a budget buster). Basically wrapped, draped, and duct taped everything, leaving the seat still accessible. the teeth were a pieces of styrofoam left over from a recent fruit delivery that just happened to be the right length and height. we painted black arches to create teeth and again duct taped onto the stroller. the eyebrows were a floral foam ring/wreath from the dollar store cut in half and covered with some spare dark green fabric i had on hand. the eyes were another dollar store find: d-i-y clear plastic ornament bulbs. from the inside, we painted the black pupil, then the brown iris, and finally the whites. we then attached it to the fabric of the eyebrow by re-attaching the ornament topper/fastener thru the fabric. then the eye+brow was attached to the plastic skin by sewing; i used more duct tape on the underside of the skin to enforce the plastic at the sewing anchor points (3 for each eye). Added a touch of make up to my son to make him look a bit ore wild and dirty. People could immediately tell the stroller was a dinosaur (some guessed dragon) but the tie-in to Pixar's film eluded most. Thus I dub this costume "Karlo & Splot" rather than the actual Disney characters, Arlo (dinosaur) and Spot (caveman).