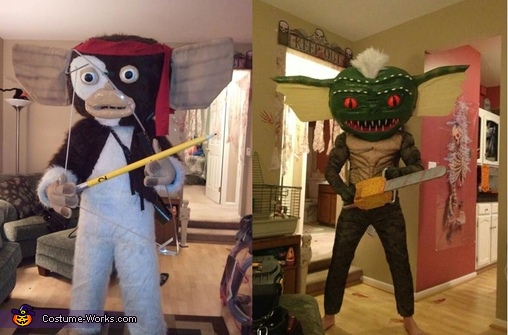 A word from Sean, the 'Gizmo transforms into Gremlin' costume creator:

One of my favorite movies when I was growing up was Gremlins! It follows the story of a creature named Gizmo and the dangers of what happens when you dont follow the rules of taking care of Gizmo.

The main rules are don't feed Gizmo after midnight and dont get him wet. In the movie Gizmo ends up getting wet and he multiplys into multiple Gizmo's. Then at some point the new Gizmo's get wet and turn into Gremlins!

So for my costume I wanted to make a Gizmo costume that transformed into a Gremlin!

Step 1 - Making the Gizmo Body - The first thing I did was cut the flight suit down the middle of the back and on each leg. Once in full costume I would need for the flight suit to tear away. Using fishing line for thread I sewed on 1" memory foam to the entire suit. This would make the costume look larger and give it a better shape.

Step 2 - Making the Gizmo body - Once the entire costume was covered in memory foam, I sewed on the fake fur. On the back of the suit and legs I added velcro so the suit could break apart when needed. For the hands of Gizmo I used some clown gloves and spray painted them tan. I cut down a 2 liter bottle to make finger nails for each hand.

Step 3 - Making the Gremlin head - I started with a 12" cement tube for the base of the head. I added newpaper and masking tape to form the basic shape of the Gremlin head. Once the overall shapoe was done I covered the head in about 10 layers of paper mache. The ears were made from cardboard.

Step 4 - Making the Gremlin head - Once the paper mache dried I added some more details to the face. I added an eye hole, nose, mouth, and eye lids. Once that was done I painted the whole head with a white primer paint.

Step 5 - Making the Gremlin head - I covered the entire head with a green latex paint adding in a little sand to make the paint more textured. The eyes were made from a cut in half fake orange. I added a bone bead design around the eyes to look like eye brows. The teeth were fake pumpkin teeth. I added a white mohawk wig and hot glued it down to the main head.

Step 6 - Making the Gizmo head - Since the Gizmo head would need to tear off when I transformed I put a layer of tin foil around the Gremlin head. I then added a few layers of masking tape and a few layers of paper mache. I then glues down fake fur to the head. The eyes were fake oranges cut in half and painted white. To cover up the Gremlin ears I sewed together some fabric and spray painted it tan to look like ears. They were designed to slide right off when transforming.

Once the head was complete I carefully cut the mask down the middle going left to right. I added velcro to each piece so that it could easily tear off when transforming.

Conclusion - In the end the costume turned out great! When I walked into a room people were taking a bunch of pictures and loved seeing a 6'4" tall Gizmo walking around. People had no idea that a Gremlin was hidden under the Gizmo costume!

At the end of the night well on stage in a costume contest I broke out of the Gizmo suit, and when I tore the face away to reveal the Gremlin the crowd went wild! I saw multiple people with their mouths wide open with shock.

Hope everyone enjoys the costume and let me know if you have any questions.