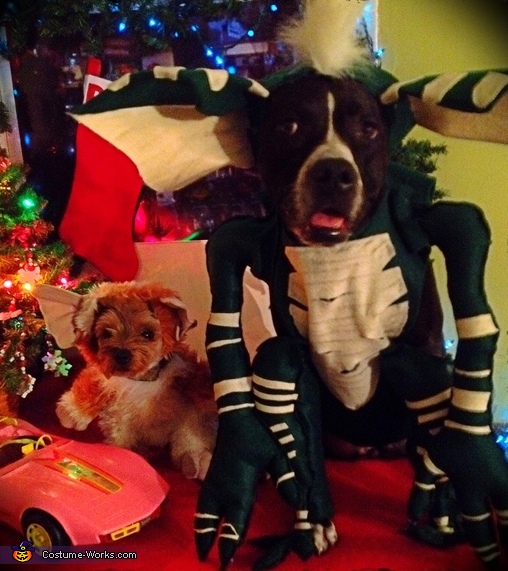 This homemade costume for pets entered our 2013 Halloween Costume Contest.

A word from Kris, the 'Gizmo & Stripe from Gremlins' costume creator:

My dogs Sebastian (a 4 & 1/2 year old yorkie) and Pepper (a 2 & 1/2 year old pit-mix) are wearing the costumes I designed and made for them. I spent a total of $26.71 for felt, hot glue sticks, and a package of fiber stuffing. My inspiration was of course, my favorite scary movie from my childhood, "Gremlins". After sketching out the pieces of both costumes onto paper, I did my dogs' measurements and then used a marker to draw all the pieces onto the felt materials. Next, I began the process of cutting out each piece and it's mirrored opposite double so I could later stuff hot-glue the the edges around each piece leaving the inside hollow. After all my piece edges were glued together, I began the endless process of stuffing the insides so as to make the costumes appear 3-dimensional. The costumes were fitted so that when the dogs sit, it gives the appearance that their costume characters are standing up on two legs as they do in the movie. I had made straps with velcro attached that I was able to securely hold the costumes together once on the dogs. The velcro straps were also untilized for both costumes helmet ears. An under the chin velcro strap was hot glued strategically so the final "helmet" piece of the costume could easily be worn hat-style and securely & snuggly fitted and held in place. All in all the overall construction took only a couple of days working 5-6 hours each day. I'm very pleased with my creations and hope that you enjoy them as well.