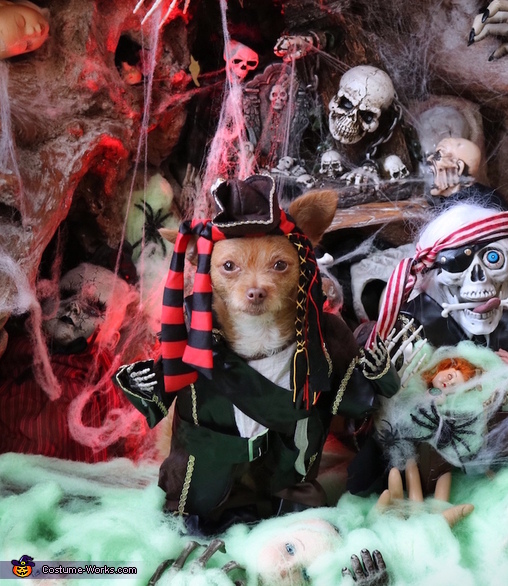 A word from Suzanne, the 'Ginger the Pirate' costume creator:

This is Ginger, my 2 1/2 yr old foster fail!
Started out wanting to do the skeleton in the back of my dog, holding the box of bones on my dog's back, like the popular DYI pirates holding treasure chest costumes seen on the web, but the box would not stay put, so..plan B..
bought a bunch of items from 99 cent store, found some doll heads, and Barbie arms..I removed the stuffing from the Pirate costumes on both Ginger and the skeleton, and replaced them with wire skeleton arms/hands so the arms would be posable. The green foam is green cob webs, and I placed doll body parts, and skeletons under the green to give it that 'body part in stew' look.
The mini eye patch was bought on Etsy. The white wig on the skeleton was taken off a doll. The skeleton's tongue was bought at the Dollar store, in the kids toy section . I also molded and tried pink play dough, which worked, but the then I found the tongue. I used a laser light behind my dog, pointing up to look like fire..this was my most expensive item, at $30.
I added cob webs, spiders, fake eyeballs etc. almost all were purchased at the 99 cent store or Dollar tree..
Whatever you can't find, someone on Etsy will make it for you!

I have more detailed pics, if anyone wants to see them, let me know.
Next year I'll attempt again the Pirates holding the chest on the dog's back..