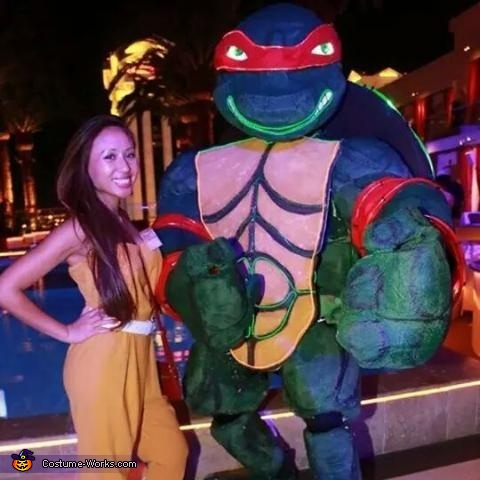 Standing almost 8ft tall. The malleable upholstery foam allows me to pose freely with April O'Neil. I can jump, punch, kick, wave to name a few

I always have loved the ninja turtles and was excited to make this costume. In my opinion, the turtles from the 90s movies looked too cuddly and ineffective in battle. The newer looked too humanoid. So, I decided to construct an almost 8ft tall turtle that looked like it could take out a row of foot clan soldiers while maintaining the comic book turtle feel.

The head was created around a beach ball. Upholstery foam was used to build around the ball to create the head shape. An electric carving knife was used for definition for facial features. In order to create realism of a turtle, the skin was created with paper towels and barge glue. This was pieced onto the head frame in layers like papier mache. It was then painted black as seen here. The head was then painted green with acrylics. For the eyes we used starbuck plastic and painted the iris. For the mask/bandana red felt was used.
The shell is completely made out of EVA foam. It was cut in a giant oval in proportion to his body. Smaller pieces of EVA foam were then used to create details of the shell to show segments. It was then layered with gesso glue as a "primer" then painted over with brown acrylic paint. I added el wire blinky lights around the ridges of the shell so that the shell could be easily seen in the dark.
Much like the head, the body was created using layer of upholstery foam and carving. It was then layered with glue and paper towels for the skin and painted black. Once it dried, I painted green on top for the slimey green look. The chest piece was constructed from a thin layer of L200 foam. Other muscles pieces where carved out of L200 as well. These were then glued together and painted with gold acrylic and brown for definition. The legs we made the same way except I used panty hose to form the legs before painting. For theshoes. We got 6inch platforms and wrapped the shoe with duck tape and upholstery foam. This was then painted with paper towels, glue and black paint like described above.
Standing almost 8ft tall. I wanted to make sure this giant costume could move freely and not be a giant log. The malleable upholstery foam allows me to pose freely. I can jump, punch, kick, wave to name a few. All in all this costume took about two months to make and I had a blast making it and wearing it for Halloween. Hope you enjoy and thank you for your consideration