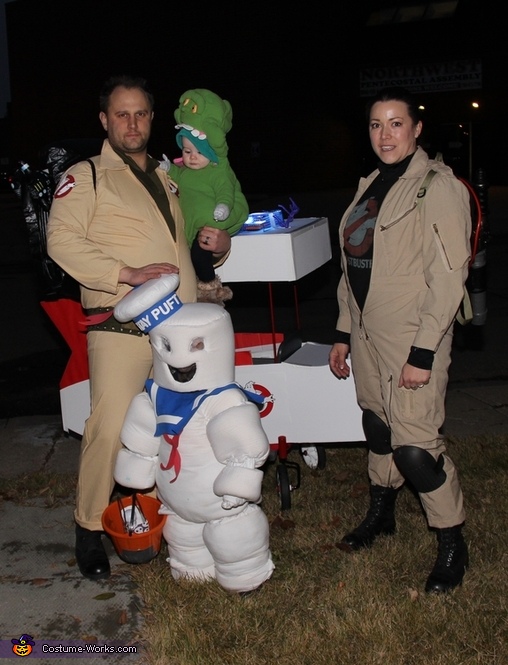 A word from Vanessa, the 'Ghostbusters' costume creator:

My 3 year old son has a healthy obsession with Ghostbusters this year after watching a preview for the new 2016 movie. After watching the original movie, his favourite character became the Stay Puft Marshmallow man. Throughout the summer i was required to provide many drawings of the staypuft marshmallow man and had to "act out" scenes from the movie on a daily basis. So when it came time to ask him what he wanted to be for Halloween, of course he said the "stay Puft Marshmallow Man!" (he will also say the same when you ask him what he wants to be when he grows up!). I started to work on my 3 year olds Marshmallow Man costume in September, using foam I had used in our previous Big Block Sing Song costumes in 2014. My sewing skills definitely improved this year! I had a hard time completing his costume as he would frequently wear the unfinished pieces throughout the day. once his costume was complete I started to work on my 7 month old daughters "slider" costume using green and pink, fleet and ping-pong ball eyes. Thank goodness she was small, or I probably wouldn't have had time to complete all the costumes by Halloween! My husband and I scrambled last minute to find our flight suits for our ghostbusters costumes (I cheated and used my son'd proton pack he got for his birthday which he was not pleased with). for trick-or-treating, I constructed a frame for our wagon with bristol board and some LED lights for safety. It didn't have as much detail as I would have liked, but my son was pleased as punch and the lighting had an added safety at night for trick-or-treating. I am trying to convince my son that Halloween is over, but he insists on wearing his Marshmallow Man costume on a daily basis. I'm happy he is getting good use and lot's of enjoyment for all the work we put into it!