Ghostbusters and the Stay Puft Marshmallow Man
by Shelley 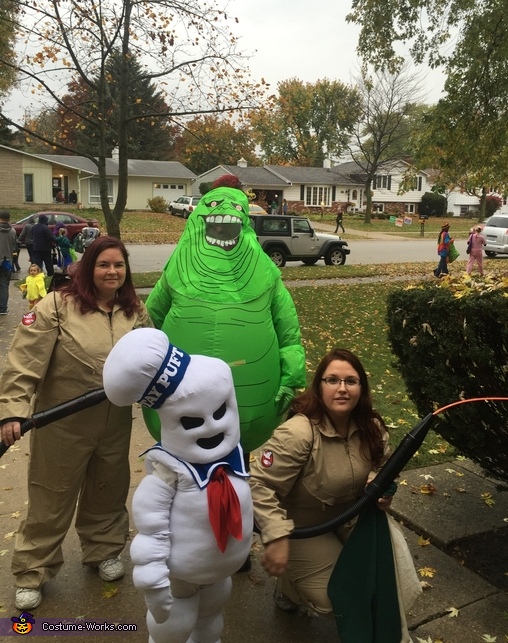 A word from Amber, the 'Ghostbusters Family' costume creator:

This family costume idea surprisingly enough, came from my four year old son, Maddox. He is absolutely enamored by Ghostbusters and the Stay Puft Marshmallow Man. And when he chose to be him for Halloween this spring, I couldn't help but be absolutely excited about his great taste. Quickly we all decided we wanted in on his awesome plan. He couldn't be the only one having such a massive amount of fun running around and in his words "scaring everyone in the city" in his Stay Puft costume. In the ghostbusters costumes were myself and my mother, these were made with purchased flight suits with patches added on. The proton packs were made from craft and dollar store supplies cut and glued to a board base. They were then spray painted black, a hose was cut and attached and at the end I cut crayon piggie banks and inserted glow sticks for the power stream. Slimer's costume was purchased and worn by my father. Most importantly, the Stay Puft Marshmallow Man costume was worn by my son and made entirely by myself. I created "water wing" like arm and leg rolls from fabric and fiber fill. The body piece was based on a tank top, double layered with the mid section stuffed. The scarf was simply cut red fabric, and the bib was cut and glued. The head piece (the piece de resistance) was the real challenge. I designed it from foam rectangles, fit to my sons head, and glued in a cylinder shape. I fit a piece in the top for a more sound structure. I cut the eyes and mouth. Then the foam structure was covered in a white fabric case that was seen to fit, and lightly stuffed. I cut the space for the eyes and mouth and glued the fabric to the foam. I used jersey material for the eyes and mouth for vision and breath ability. The hat was sewn then glued to the head. And lastly mittens were made and Velcro anchors going from the head to the chest piece were placed. It may sound like a lot of work, but it was surprisingly smooth to make.