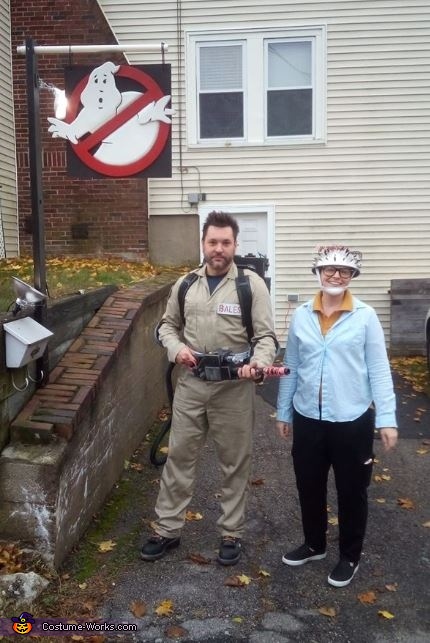 A word from Bryan, the 'Ghostbuster' costume creator:

Since childhood, I've loved the Ghostbusters and it's been on my costume list for at least a decade.

The clothing consists of a Dickie’s basic cotton coveralls (Khaki), canvas double grommet hole belt (White), and 4” Ghostbusters embroidered patch, which were all purchased via Amazon. I already had the black Carolina logger boots.
The Alice Pack Frame was fabricated from ½” PVC pipe, two 90° fittings, two T fittings, ¼” PVC flat stock, nylon webbing/strapping and quick release buckles (salvaged from a messenger bag), rivets, and sheet metal screws. It was finished with PVC primer and then black spray paint.
The Proton Pack was fabricated from EVA Foam mats, various PVC pipe diameters, PVC flat stock, and wooden dowels. Details consists of electrical wire, ¼” PEX tubing to make the 90° fittings, an old school computer ribbon cable, and red flashing LED light to illuminate the Cyclotron.
The Neutrino Wand is also EVA foam, ¾” PVC pipe, 2 T fittings, PVC flat stock, and wooden dowels. Details consist of toggle switches, electrical wire, and an EL LED wire kit which illuminates the tip of the wand, as well as the internals.
Braided cable sleeve was used to connect the Neutrino Wand to the Proton Pack. A Wand hangs on the pack via a shop made aluminum bracket. All of the labels were printed using a color laser printer and affixed with Barge contact cement.

The elbow pads were fabricated from EVA foam mats and a length of brown spandex.
The Ghostbusters sign was fabricated from EVA foam. The post a common 2x4 with a length of 1” PVC running through a hole. The sign hangs from zip ties.
All finishing was accomplished by first starting with plastic primer for the PVC and Plasti Dip for the foam. The top coat was primarily spray paint (black/white/red/silver), with a bit of acrylic paint for the smaller knobs on the Neutrino Wand. Rub ‘n’ Buff metallic wax added for a weathered look.
The Keymaster's helmet is built upon an old metal colander. The handles and feet were removed using an angle grinder. A plastic chin strap was attached using elastic. Electrical posts were fabricated from short sections of sprinkler tubing and small sheet metal screws. Wires were then coiled and adhered into the tubing with hot glue. For added detail, small capacitors were salvaged from an old mother board and attached with hot glue. The odd combination of a button down over a polo shirt and glasses round out the Vinz Clortho look.
As soon as the kids rounded the corner, saw the sign and proton pack, they started singing the Ghostbusters theme song. Kids didn't want pictures, but the parents sure did and most of the dads had to check out the Proton pack and ask about its construction. All in all, it was a hit.