Genie on her Magic Carpet Costume 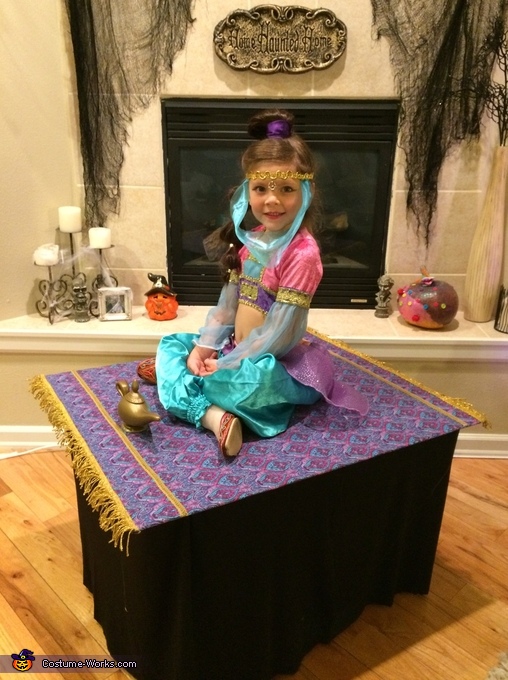 Genie on her Magic Carpet Costume

A word from Audrey, the 'Genie on her Magic Carpet' costume creator:

Who wouldn't want to go on a magic carpet ride?! When my 5 year old daughter, Sophie, told me she wanted to be a genie, I knew I had to take it to the next level, as "just a genie" was too boring to me. I make her costumes every year, and love a challenge. And my little genie on her magic carpet was quite a ride in itself to make.

I first started by finding her a genie costume at a thrift store (didn't need to be brand new, as I'd be cutting the butt open on it). I also found shoes and accessories for her genie look.

Second was the carpet. I used a big piece of cardboard and cut it to size. I then hot glued on a piece of carpet looking fabric onto it and then cut a hole out of both the fabric and cardboard for her to stand thru. I added tassels to the rug to give it a more realistic look.

Next was her legs. (This was where the illusion was really going to take its shape.) I used nude nylons and filled them with stuffing. I made sure they were in proportion with her body size. I put the "legs" into the genie costume pants and attached them Indian style on the carpet, with the butt aligned with the cutout hole. I then cut out the butt on the pants so Sophie could stand thru both the pants and the carpet, and the waist of the pants would be around her waist. I then glued the shoes on to her "feet."

Then was the stand for the carpet to attach to and glide on. First we measured the height so it would be proportional to her body. We used small pvc pipes, cut them to size and made a square shape frame. Then attached small wheels to the bottom. (It's similar looking to a walker.)We attached it to the carpet with zip ties. Then glued black fabric all around the bottom edge of the carpet to hide it.

And lastly, just finishing touches. Hair, makeup, and a genie lamp glued to the carpet. My little genie was ready for take off!

We opted for trick or treating at the mall, (as it would be easier for her to glide around), and the jaw dropping looks and "how'd you do that?" questions were hilarious! Many thought it was remote control operated! Some where just plain right confused. It was a memorable costume to say the least. And I can't wait to create whatever next years get up will be!