Genie on a Magic Carpet
by Terra

Genie on a Flying Carpet
by Rachel

Genie on a Magic Carpet
by Lisa

Genie on a Flying Carpet Costume 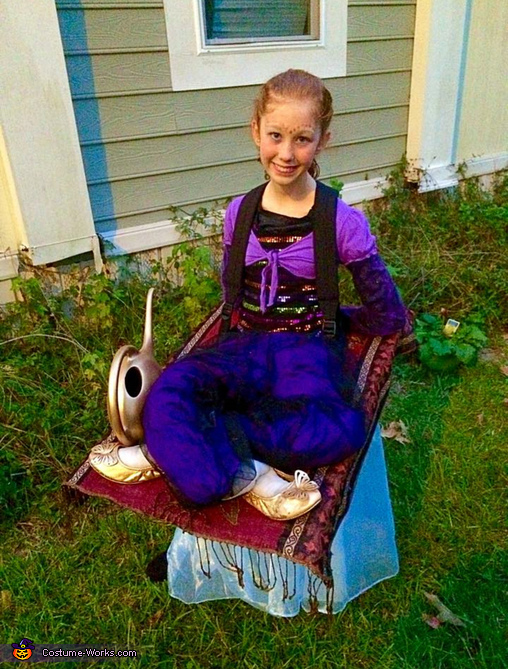 Genie in a Flying Carpet

A word from Kellie, the 'Genie on a Flying Carpet' costume creator:

This is my 10 year old daughter Keela. She is wearing a genie on a flying carpet costume. I found the idea on Pinterest and found some instructions that I adapted. I already had the genie costume, pantyhose, tank top, tie front shrug, toile (for gauzy arms), elastic & shoes. I got a scarf for the rug, a backpack & a ruined dress for the floaty fabric at a thrift store, I bought a foam board, a watering can, gold paint, polyfil, & dowel rods. I cut a hole with a slit to the back just big enough for her waist to fit, glued the scarf to the foam board (folding over the excess), cut the fabric off the bottom of a dress and glued it around the hole (but if I had it to do again I would glue it in a rectangle around the bottom of the foam board so it doesn't look as much like a dress) and reinforced the foam board with dowel rods on the bottom because it was starting to dip when I added things to the top of it. I put pantyhose in the legs of the genie costume and stuffed with polyfil letting the foot and a little leg of the hose stick out. Glue shoes to the feet. Arrange legs on carpet so they are crisscrossed & glue them down. Paint watering can gold and glue it to board being careful where you put it so that it is weighted as evenly as possible. I cut the toile big enough to cover her arms and sewed them together down the long sides & sewed one short side to the sleeve of the shrug. I sewed a hem in the other short side and threaded elastic through it to make it gathered and fitted at the wrist. She wore the jacket over the tank top. Next time I would tie some tuile around her ponytail to look more genie like. She wore light colored tights on bottom so they wouldn't show through the fabric under the rug. I cut the backpack so that I could use the straps to hold the board on her. She wore the straps under the clothes so they wouldn't show. Getting the backpack straps in the right position so the board hing at the right angle & getting the board weighted properly was the hardest part!