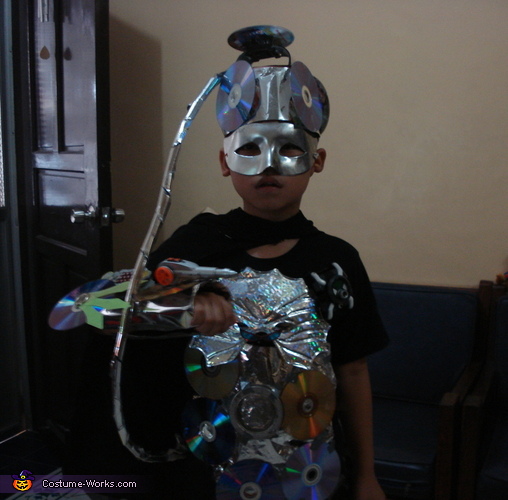 A word from Esleen, the 'Futuristic Kid' costume creator:

I made this costume for my son Dave ,he want a coolest costume not so scary costume to used for their school Halloween party.I don't want to spent much for his costume so I decided to made it instead of buying.And surprisingly he won the first prize. I used an old cd and glued to the black shirt,pants and hat.I cut a silver paper then glued to hat and tube.He used silver mask for his face. I also put some of his old toys and ballpen to his costume.Bringing home the 1st prizemade my son happy to their Halloween party and made me happy to seeing my son with a big smile.
things you need: old cd, glue stick, old tube from a small air pump, hat or cap,silver paper,old black shirt and pants,some used toys,silver mask
By the way,I only bought silver paper and glued stick for his costume the rest we already have at home. So it cost only $1.oo. Hope it gives an idea to those who need an inexpensive costume for the Halloween.