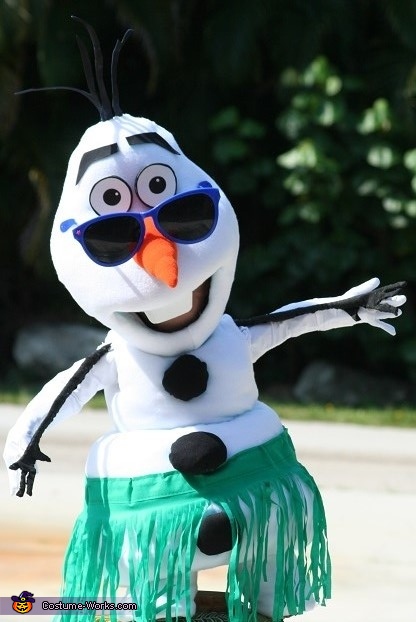 A word from Darcy, the 'Frozen Olaf' costume creator:

Ladies and Gentlemen, Introducing... Olaf and Marshmallow the endearing snowmen from Frozen!
My latest costume inspiration came from the popular Frozen movie. I wanted to make a costume that my grandchild and I could wear together. Frozen is her latest obsession and she loves the Olaf character.

The Olaf costume is super lightweight and comfy for my grandchild and has good visibility. The base of the costume headpiece is butcher paper and duct tape. The base is covered with a layer of batting and then a top layer fleece fabric. There are craft foam eyes and a fleece nose. The body is tulle tied onto a crochet band at the top and a small hula hoop at the bottom. The body was then covered with fleece . I used a thrift store t-shirt for a liner so the scratchy tulle doesn't come into contact with skin. I am proud to say it is one of the most comfortable costumes I have ever made!

All the pieces were glued together using a silicon cement from the hardware store . The cement is strong ,flexible and waterproof.

DETAILS
In an effort to make the costume easier for others to replicate, I had to go backwards and make a pattern after the costume was complete. I had no idea that it would come out so well. I surprised myself!

The pattern pieces can be used for all layers. First cut the pattern out of stiff paper like butcher paper. I used a roll of brown paper from the home improvement store. Using lots of duct tape I rounded out the shape. This is by far the most tedious step, but if everything is in the right shape and proportion after this step then the rest will be easy. Sometimes at this step I will have to enhance some areas by added a little more paper or tape or a may have to trim away with scissors if some part is too large. This step took a couple of hours before I was satisfied with the look and expression that I imagined Olaf would have.

When you are satisfied with this step then cut out front and back pattern pieces from batting (found at fabric stores). Form this over the paper and tape base making sure that everything is very smooth. trim away any excess so that the area where the pieces meet is as seamless as you can make it. This step is solely for the purpose of giving your finished product a smooth texture. This is the step where you want to eliminate any imperfections. Make sure everything is symetrical at this point. I either use loose stitches to hand sew the sections together or I use glue.

For the top layer use fleece fabric and cut out the front and back pieces. Repeat the same process as with the batted layer. I would definitely hand sew the pieces together after formed over the headpiece.

Make the lining bu cutting out 2 lining pieces from the fleece. Sew the 2 pieces together across the top and at under the chin area. leave the face and neck open. Put his inside the head and hand sew the mouth section of the lining and the top layer of fleece over the headpiece together. Also, hand sew the neck and back opening to the top fleece. At this point looking inside you should only see the lining. The paper and tape should be covered.

The nose is cut from fleece and stuffed with polyfill. It is sew into position on the head.

The eyes, eyebrows and hair are made of craft foam that I painted and glued on. For stability I glued wire to the back of the hair to keep in erect.