Marshmallow from Frozen
by Eli 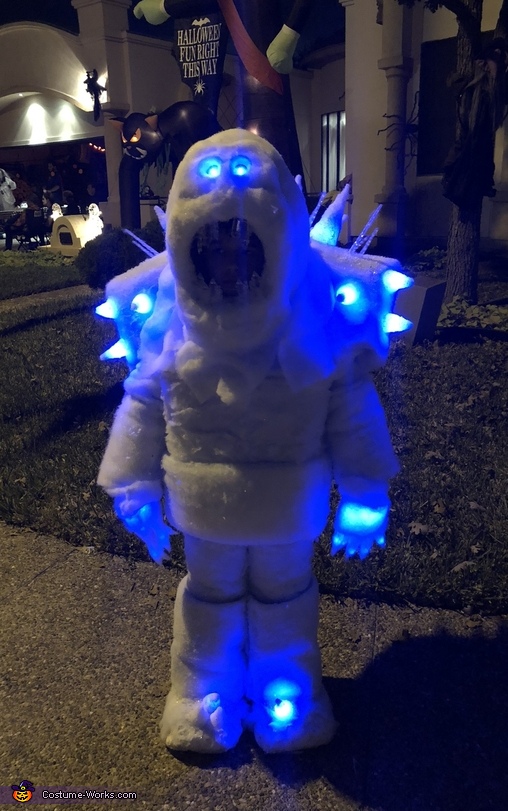 Halloween is our favorite time of year! This year, Halloween
2018 my 8-year-old son decided to be a snow monster. Every year I DIY our costumes, sometimes I start as early as June. It’s a long family tradition, my grandmother use to make my mothers costumes, my mother use to make my costumes, to continue the family tradition I create our costumes each year. We almost always choose a family theme, we chose a “winter” theme this year, I chose the be a snow queen.

I researched our costumes for about a month before deciding
on the materials that would be used. My inspiration came from Disney’s Frozen snow monster. I rummaged through my house to get an idea of materials I could potentially reuse or repurpose to create the costume. The most challenging was finding material that
was light weight and easily moldable. The costume cost about $80 to construct and took about 2 months to complete. After much consideration I decided on the following to create my sons snow monster:

The costume was constructed using chicken wire over a white plastic trash can and a piece of cardboard to create the basic frame and shape. I then used duct tape to cover the frame followed by several layers of quilt batting. I used styrofoam cones, carved them, created an opening and inserted lights. I used LED blue battery operated Christmas lights.

The arms are made out of an old rash guard shirt covered in several layers of quilt batting(only arms) which allows for easy movement. I used a piece of upholstery foam sheet on the shoulders for comfort and support.

The legs are made from an old pair of khaki pants covered in several layers of quilt batting.

The head was created using a plastic helmet covered with upholstery foam and quilt batting. The teeth are made out of acrylic icicles with LED lights around the mouth and blue tea lights for the eyes.

My son was thrilled with his costume. Most people found the costume impressive, some reactions he got were “Where did you buy that?”, “WoW”, “Did you make that?” “Crazy” and “Can I take a picture with you”. Our friends and families praised the creativity, others were in disbelief. Overall, I enjoyed the challenge, most importantly I enjoyed seeing the smile on my sons face.