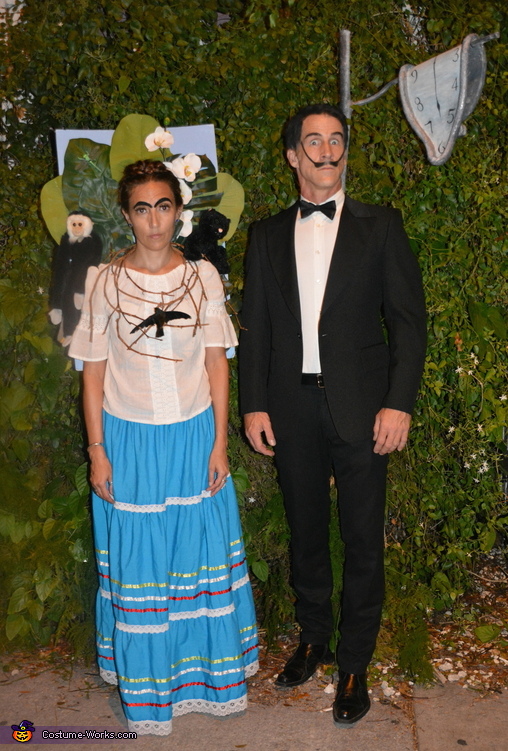 The Artists - Frida and Dali

This homemade costume for couples entered our 2015 Halloween Costume Contest, in the Best Couple Costume nomination!

A word from Laura, the 'Frida Kahlo and Salvador Dali' costume creator:

My boyfriend and I decided to dress up as our favorite artists this year. Mine is Frida Kahlo. I didn't want to just dress like her, I wanted to become part of my favorite painting - "Self-Portrait with Thorn Necklace and Hummingbird." I wore a foam board on my back which was covered with artificial leaves, a toy monkey and cat. I also created a neck piece made out of grapevine. Frida was known for her witty quotes and on the back of the board I included one of them - "Take a lover who looks at you like maybe you are magic."

My boyfriend's favorite artist is Salvador Dali. Not only did he become Dali, but he became part of one of his most famous works - "The Persistence of Memory." He created a hidden base under his suit coat in which to mount a real tree branch. From this branch he hung the trademark melting clock which he made from paper mache. On his back he attached a frame containing the Dali quote - "There are some days when I think I'm going to die from an overdose of satisfaction."

Our costumes were a hit! We received many compliments that our creations were "spot on!"