Raptor from Fortnite
by Jessica 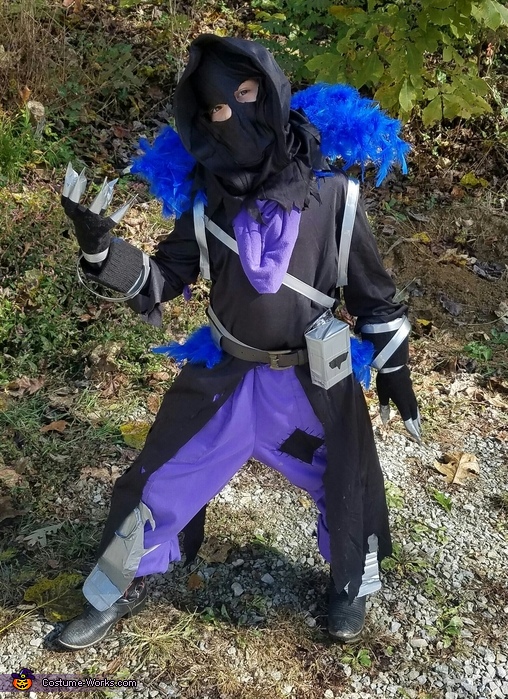 The Raven worn by Zachariah Berry

A word from Ashley, the 'The Raven' costume creator:

The Raven, worn by Zachariah Berry. Is a character off of the popular game Fortnite. My son loves this game along with many others right now. When I asked him what he wanted to be he said the Raven. I had no ideal what he was talking about but I knew it had to be somthing off the game. I told him it would have to be something we could make because we were not buying costumes this year. When he showed me who the raven was i thought " nope... not going to happen" then at the store i see a costume the unknown phantom and it was all black and i could see its potential. Lol. The backpack was the only accessorie he asked to go with the costume. You'll see in the photos posted the original costume I bought for $16.99. Other materials cardboard, lots of duck tape, hot glue, sewing needle and thread, few strips of poster board, a pair of kids play glasses, a pair of .99 cent gloves,. 99 cent purple t-shirt to cut up, one pack of .99 cent purple glow Sticks, a $3.50 blue bowl, $4.00 pair of thrift store purple pants, and a pool noodle. We popped the lens out of the glasses and hot glued purple glow Sticks around the frame to get the appearance of the glowing eyes, unfortunately non of my pictures front the dark turned out so I don't have any to show of the eyes.