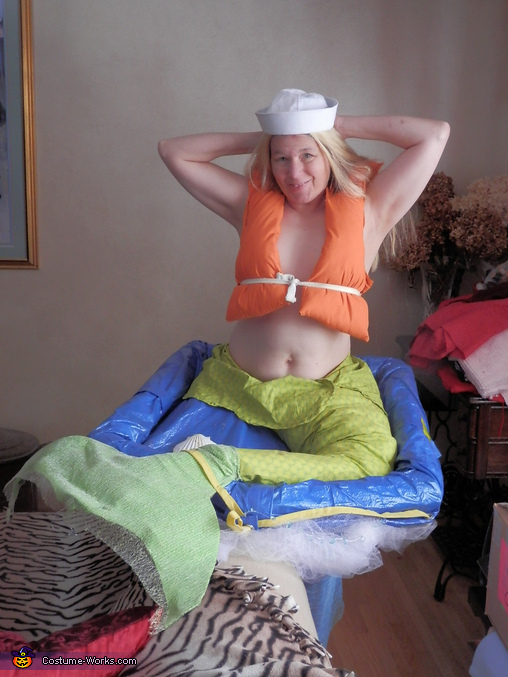 A word from Jenny, the 'Float My Boat' costume creator:

Halloween 2012 I had just become curious about local costume contests. I wondered if once again, I could be the one to create the coolest show-stopper in the room. Something completely unique that doesn’t come on a hanger or in a carton year after year at the costume store. I was thinking of a mermaid, but how would I conceal my legs and feet? Then, while poking around a surplus store, there were cardboard tubes about 4” in diameter. Looking at them, I visualized a little life boat. On another trip, this time through the fabric store, I found a light green fabric with a hexagonal grid pattern. Not exactly fish scales, but it lent itself to that look. Soon, I had sculpted a mermaid tail which lay in my little life boat. It would be suspended around my hips floating on a fabric ocean wave.
Halloween 2013 Sadly, the whole thing got about half done last year. Again this year, I did not properly manage the construction schedule. Contest night found me frantically sewing and stapling and coming up short of the vision I had for my costume. I’ve always been opposed to mermaids wearing bikini tops, even if they’re made of sea shells or coconut shells. Mermaids swim topless just as they should. Still, I had to cover up somehow…..at least a little. I considered sewing the hair of a long wig into just the right shape, but then realized that a mermaid in a life boat tells a story, just like a little cartoon. A foolish sailor tried to catch me, you see. That’s why this bright orange vest was put around me! To complete the picture, I put the silly sailor’s hat on my head. Poor Limey didn’t know what he was in for, jumping ship and rowing after me.
Halloween 2014 This year, after changing addresses, finishing a college diploma and getting a job as an x-ray tech, I finally had a grasp on my schedule which let me unveil my marvelous mermaid! How much time and money had I spent so far? Probably about $50 and many enjoyable hours at the work bench. To finish,I sewed on some beads that look like water droplets flying off the front of the wave. I pinned on beads that look like bubbles. I put on a long wig and false eyelashes. I hid between my car and a big truck and strapped my boat on my butt. Then I walked into the bar and tent party. I was not allowed on stage for the contest, but as I circled around, my costume was admired by many. Other ladies in mermaid costumes were jealous, I could tell. It gave a big laugh to lots of people having a good time. A few stuck a hand behind my life vest to find out- no, there’s nothing else behind it. They could have just asked, of course. I must admit a design flaw. This costume would most likely require complete removal in order to use the ladies’ room. I planned accordingly. After enjoying the huge Halloween party for a while, I returned to my hiding place by the car and quickly pushed the boat in the back seat. I went home, smiling with satisfaction and humming “The Tide is High.”