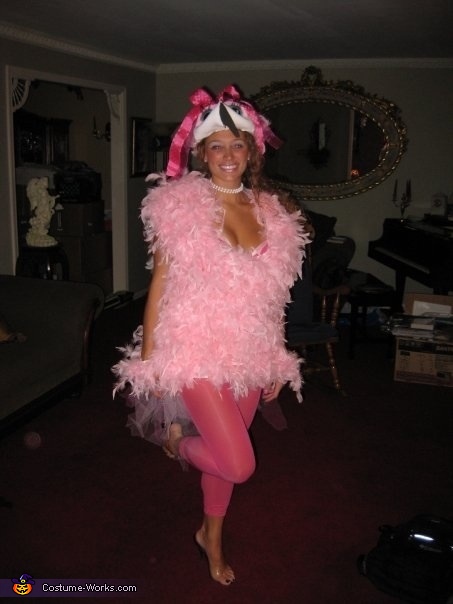 A word from Jennifer, the 'Flamingo' costume creator:

I love flamingos and decided I wanted to be one for Halloween. I got a white sweater dress and hot glued pink boa feathers around the dress, making sure to put a pillow to mimick the shape of me so the feathers were not glued too tight around the dress. After that, I took two different pink tulle and sewed them on the back inside the dress to make the shape of a body to give it volume and left the tulle long to have it show at the bottom Of the dress. i wore footless hot pink leggings and pink high heels. The hat was the most difficult. When I was younger, my brother and I had Donald Duck hats from Disney, of course we didn't have them anymore so I ordered one on EBay. I cut the beak so it was more of a triangle rather than rounded and then took foam board/paper and shaped it into the beak and secured with hot glue. After that I sponge painted it to give it the coloring and added a bow to make it a "girl" flamingo. Because the sweater dress was "v" shaped it left an opening so I wore a pink bra to show thru!!! Soo cute!!!