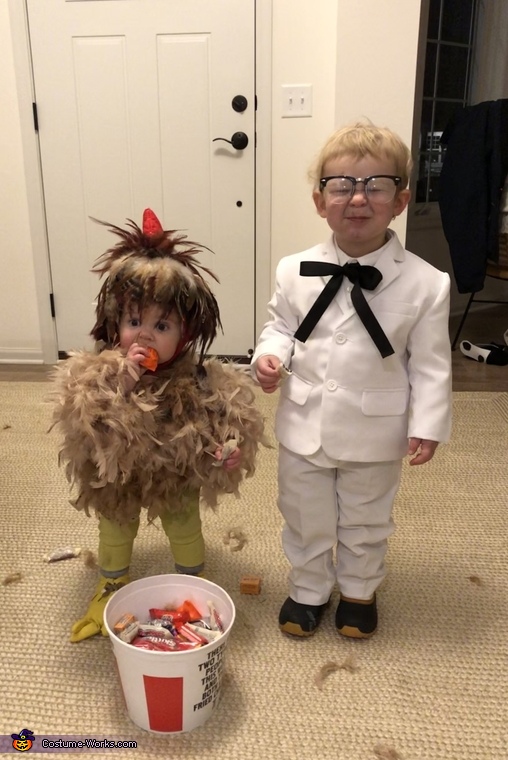 Just a colonel and his chicken

A word from Kallie, the 'Finger Lick'n Good' costume creator:

Featuring 2-year old Julian as Colonel Sanders and his sister, almost 1 year-old Emma, as his chicken.

Before the kids are old enough to have an opinion and choose their own costumes, we wanted to do something coordinating that we may not have the chance to do in years to come. Our little boy Julian is a total ham and little girl Emma a bit more reserved, so this seemed a good fit.

We made the Colonel costume by simply assembling odds and ends - a two piece white suit, white shirt, black ribbon for his tie, fake glasses, and makeup/spray for his mustache/beard and hair.

We made the chicken costume by wrapping several feather boas around a brown turtle neck bodysuit. Her comb and gobbler were sewn out of red quilted fabric. The comb was then stuffed and sewn to a winter stocking hat and the gobblers were fitted over the hat’s poms on the end of the strings. We completed the hat by sewing several rows of feather trim to give her some spikey silkie-like feathers and full feathered head. The look was completed with yellow tights and yellow rubber gloves fitted over her shoes.