Filter Before & After Costume 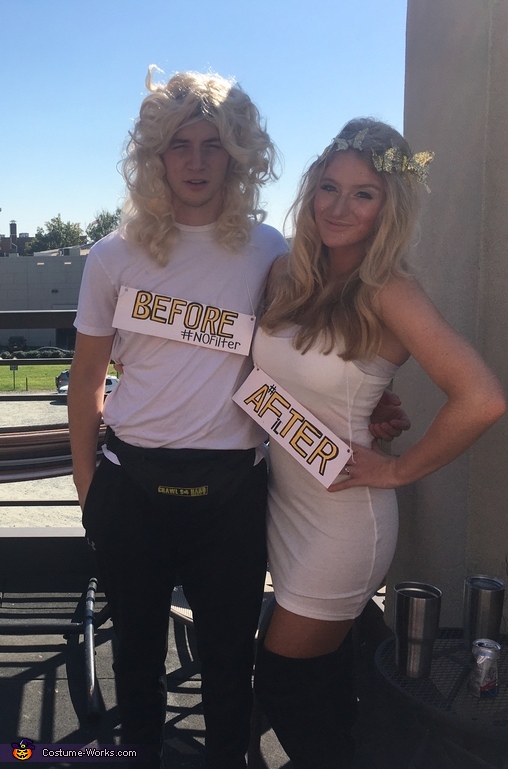 A word from Natalie, the 'Filter Before & After' costume creator:

We all appreciate the power of social media filters to bring even the worst selfies from 0 to 100. This year, my husband and I decided to do a before and after representation of a filtered photo. Not only did I think this would be a really fun and cute costume, put it also poked fun at the recent filter phenomenon and how filters are so often used as a one click beautification solution. For the "Before" my husband threw on an an old pair of sweatpants, a tshirt, and a messy costume wig I purchased for $8 off Amazon. I also smudged a bit of dark eyeshadow under his eyes for some SUPER attractive dark undereye circles. For the "After" I went as the butterfly filter. I bought butterfly clips off Amazon and glued on some extra gold glitter that I already had lying around the house for an extra sparkly effect. I also bought a small strand of battery operated fairy lights that kept the sparkle going into the night. Other than that, I used mostly items I already had, including any and al makeup with glitter I owned (YouTube had a bunch of great makeup tutorials for how to look like a snapchat filter that helped a ton). Lastly, I made homemade before and after sign necklaces out of heavy duty construction paper, markers and some basic string. Filters were a common costume this year, but this costume definitely took it to the next level! We had a blast!