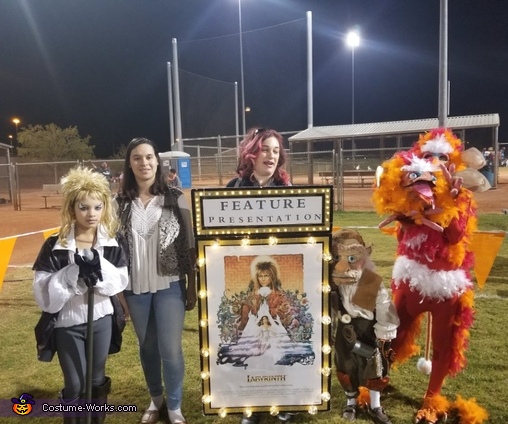 And now our 'Feature Premiere: The Labyrinth '

A word from Cassandra, the 'Feature Premiere of The Labyrinth' costume creator:

My 4 daughters and I LOVE making our costumes on a yearly basis and every year we try and top the ones we did previous years. Upon much discussion and debate about GREAT movies we came to a consensus that "The Labryinth" a 1986 movie featuring David Bowie needed to make its" GREAT" debut into this century. But how to do this when we recently met many younger people who have not heard of this "AMAZING" theatrical movie of it's time.

*Introducing this Centuries 2019
Halloween Movie Premiere "Labyrinth"
and its Cast."

Featuring "Jereth the Goblin King",
"Sarah the 16 year old,""Hoggle the
Dwarf,"and a long time favorite of
ours"Fiery" the furry or feathery
creature who can take off their
heads and other body parts for the
fun of it.

As one can see in our cast our "Fiery" brought along one of his friends heads to join us on this lovely night of our debut. A new debut always needs extra heads, right?

This features synopsis is as follows...

"The Labyrinth"- A movie where fantasy meets reality. The main character Sarah wishes the Goblin King Jareth (David Bowie) to take her baby brother away so that she may have a normal life. Upon her realization that doing this brings around her wish being granted. She is then thrust into the Goblin Kings Labyrinth upon her own request to get her brother back where there's a world of wonder, fantasy, and new intriguing interesting characters to whom live within this world. Will she can get her brother back or will she be lost in the world of the Labyrinth? Guess you will have to join us to see the ending.

*Best Advice I can give if you want to make your own Labyrinth costumes within a budget is use the resources of thrift stores and their 50% of days to save $.
HOW WE MADE OUR COSTUMES:

I used thrift stores to find most of our costume pieces and for some of the items purchased items from our local craft store like hot glue, felt, Some feather boas that were not at the thrift stores and acrylic paint.

*All of Sarah's and Jereths costumes were found at the thrift store including their shoes.

* Hoggles costume is made up mostly of oversized clothing that I purchased at thrift stores and resized to fit my youngest daughter. Hoggles mask however, was made entirely by hand. I used posterboard, a roll of toilet tissue, a roll of masking tape, yarn for hair/ eyebrows, and leftover pieces of the oversized leather vest for Hoggles hat. Hoggles head/mask took around 2 weeks to make and paint.

*Our dear friend the "Fiery" and his friend took around 2 weeks to make as well. Purchased an all red morpheus suit, some feather boas, some shoes, and some rubber costume claws from the thrift store for this costume oh and a plastic beak masquerade mask. For his "Friends Head" we purchased a decorative pumpkin and made it into the head using the feather boa leftovers, staple gun, cardboard for ears and some leftover felt, as well as a 2nd plastic beak mask purchased at the thrift store.

*Last piece to complete our group costumes was the "Feature Premiere Movie Sign" with working lights. Purchased lights from the thrift store and 2 poster boards with gold glitter trim from walmart clearance for $2.00. Printed the Feature Premiere words and bought the Labyrinth poster off Amazon for around $15 (there was no where else to get the poster other then online). Made our sign and attached a pair of suspenders to the sign and my pants so I could walk around and be the sign.

All in all our group costumes was a success. We spent around $60 for everything. The most expensive items were the Feather Boas (couldnt find enough at thrift stores) and the Labyrinth Poster (since there was no where to physically purchase it except online).