The Three little Pigs and the Big Bad Wolf
by Ashleigh 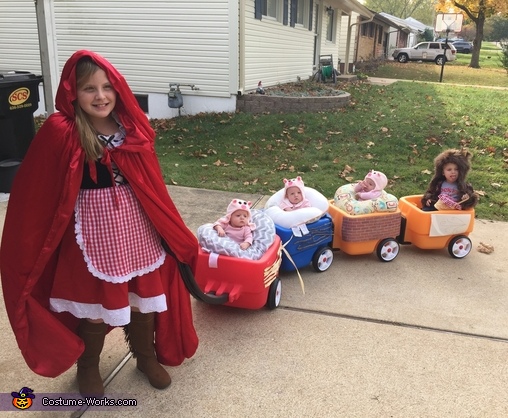 A word from Sammy, the 'Fairy Tale Family' costume creator:

This year for our costumes we decided to have all the cousin do a fairytale theme!! Sophie is Little Red Ridinghood with her big red cape getting ready to take some goodies to her Granny. And next we have the three little pigs. Our first little piggy is Gus and he is in his straw house. The second little piggy is Timmy and he's in his house made of sticks. And the last little piggy is Brody and he built his house of brick! And in the last part of our train we have Jace, the Big Bad Wolf! After he tries to steal Little Reds goodies he's is going to try to huff and puff and blow those piggys houses down!!

We first got the idea because the first two piggys are twins and Brody's Birthday is two days after. So we wanted to try to incorporate them all together some how. My husband came up with the idea for the three little piggys and to have our oldest son be the Big Bad Wolf. And my niece wanted to get in on the fun so she decided to be Little Red. Sophie and Jace's costumes were purchased but we made all of the little piggy costumes. We bought them all pink inside, pants, and socks. And then we got pink hats and glued felt on for the ears, eyes, and nose. And lastly we wanted to incorporate the little pigs houses. So I got straw, sticks, and brick paper for the houses and drew wind for Big Bads car.

We had such s great time coming up with everything for this years costumes and we hope you enjoy them as much as we did!