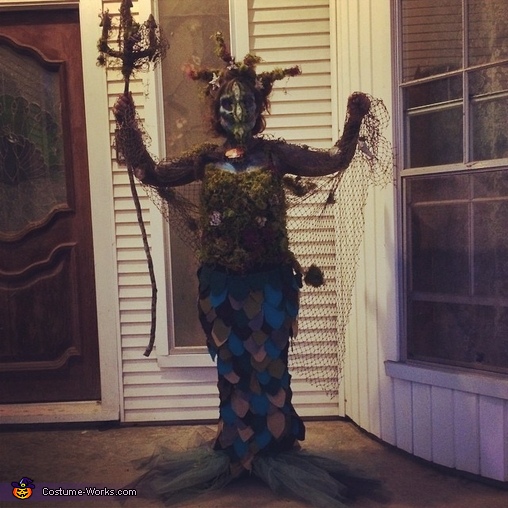 a full look at the costume

A word from Meredith, the 'Evil Mermaid' costume creator:

I've wanted to be a scary mermaid for years and finally made it happen. I made the scales out of many different shimmery fabrics hot glued to a long bodycon skirt I gathered and sewed at the knees to give it the right shape, and the fin out of tulle and seaweed. I hot glued moss to a bodysuit for the top and to pipe cleaner to make a crown that I wrapped my hair around so it would look like it was moving underwater. I bought a cheap plastic trident and took the top off and glued it to a stick and then covered it in sand, moss, seashells and fishnet. And then I made a cape out of fishnet, moss and seashells, and my friend Bev Caplan gave me the incredible prosthetic makeup to finish the look. I wanted my mermaid to look like she fashioned herself a queen out of random things she found in the ocean.