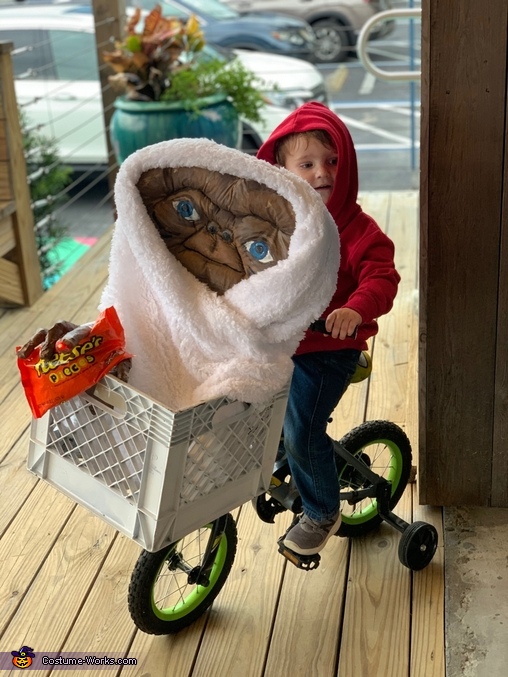 A word from Renae, the 'Elliott and ET' costume creator:

My grandson wants to be carried a lot and is not a big fan of things on his face. So Elliot and ET came to mind to make a costume around my child and to have a way to transport him without carrying him myself or interfering with his costume. Elliot” has on jeans, tennis shoes, and red hooded jacket. I painted a brown crate with white spray paint and wire tied the crate to the handlebars which could carry items needed for later to include my wallet, snacks, and sippy cup.
I had a camp pillow I sewed to make mouth and nose shapes and contour the head. I used craft paint to paint ET's face and add definition. I unwrapped a clothes hanger and sewed it to the back of the pillow head then situated in the crate so that the head would have a proper height.  After deciding on pillow height, I used duct tape to stabilize the pillow height. I draped a blanket around the head and secured the blanket to the top of the "head" using safety pins then crisscrossed the blanket under the chin of the head by tucking the first side of the blanket around the taped wire in the crate then the second side tucked around the wire taped on the other side.
I used paper mache to make the hand of three fingers and a thumb.  I removed a light from light up flower from Valentine's Day to put on the fingertip of index finger with the wire channeled under the index finger to the palm to set the on/off switch for the light. I painted the hand with craft paint to add definition and fingernails.  I taped a newspaper filled Reese's pieces candy bag to the hand and dangled over the edge of the crate to look like "ET" was holding on while holding his candy bag.  The hand was secured with clear tape.  I used another section of blanket material to drape around the wrist of the hand. The hand I made had a button in the palm to turn on the lighted finger. He loved to turn it on when we headed somewhere. The camp pillow can still be used for later along with the blanket when we travel in the car. Funny thing was he does not know how to pedal on the bike, so he would brake every once in a while and laugh at me .