Gnome on a Toad Stool
by Eileen

Gnomes on Toadstools
by Michele

Gnome Sitting on a Toadstool
by Kennetha

Elias the Gnome Rests on a Mushroom Costume 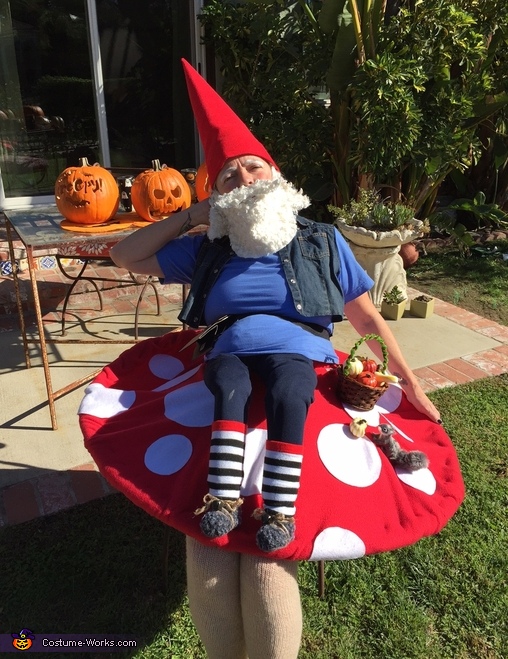 Elias the Gnome Rests on a Mushroom Costume

A word from Anna, the 'Elias the Gnome Rests on a Mushroom' costume creator:

I, Anna, am wearing the costume. I wanted to make a homemade costume and found the idea for Gnome on a Mushroom and knew I could make it far better than anyone else had done before. I found a blue T-shirt and a kids jean jacket at a thrift store and repurposed them to create and sew the gnome's top. I made the mushroom out of a hula hoop covered with a red thrift store blanket and glued the circles on with white felt from a fabric store. The brown stockings I wore for the stem were my own. The gnome's legs are child's sweatpants from Goodwill that I narrowed, and his shoes were a Christmas ornament that I separated. For the pouch that sits on his belt I used my own belt and made the pouch out of a cork wine gift bag and glued a button closure on it. The gnome's basket I found at Goodwill, and the fruits inside are from a craft store. The squirrel that is taking a bite out of a pumpkin that fell out is a Christmas ornament. The hat I sewed out of felt from a pattern and included some soft cardboard for stiffness. For the hair and the beard I used fabric from a craft store. The beard and mustache were sewn from an altered pattern, and the hair was attached to the hat.